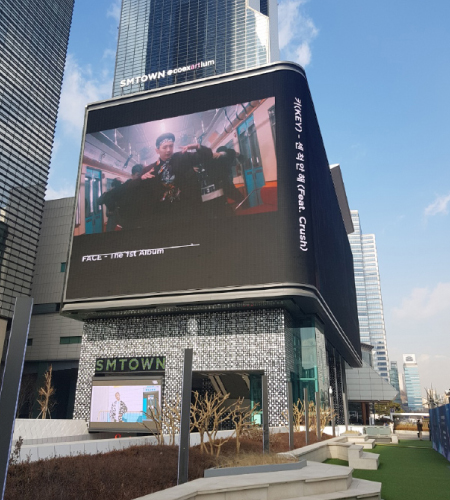 A new landmark has emerged in the heart of Seoul.

In the bustling business district of Gangnam in southern Seoul, Korea’s largest LED sign attracts attention from both tourists and locals. The huge billboard, installed in March 2018, features a mix of K-pop music videos and commercial advertisements. Surrounding the exterior wall of the SM Town building, the electronic billboard built by Samsung Electronics is 82 meters (269 feet) wide and 22 meters long, four times the size of a basketball court.

Last Friday, tourists made sure the billboard was visible in the background as they took pictures in front of the SM Town building. “I have never seen a curved billboard, it is truly breathtaking. Nowhere else I will be able to see my favorite singers this big and in HD,” said a young woman from Italy taking a video of the billboard.

Foreigners aren’t the only ones impressed by the new billboard which is located across from Coex. A passing citizen said, “It makes me proud to directly witness the development of our country.”

The Coex and World Trade Center area in Samseong-dong, southern Seoul, became part of Korea’s free outdoor advertisement zone after the Ministry of the Interior and Safety revised advertising laws in 2016. This is the only place in Korea where outdoor advertisements can be installed without any restrictions on their size, type, color or form.

However, not every reaction to the billboard has been positive.

“To be honest, I was not paying much attention to the billboard,” said a 24-year-old tourist from New York. “I understand why some people might be reminded of Times Square in New York, but more billboards have to follow in order to attract tourists.”

Samsung Electronics has already announced its participation in Korea’s free outdoor advertisement zone project for the next 10 years with its Smart LED Signage. On the Samsung Newsroom website, the company says, “The Smart LED Signage will help bolster the local economy and help the city gain competitiveness with an exciting new tourist attraction as its next landmark.”