Chung Mong-won, president of the Korea Ice Hockey Association (KIHA), knows he’ll be gone from his post when his term ends at the end of 2020. But he’s hoping the legacy of the main Olympic hockey venue in the eastern coastal city of Gangneung will live on for many years beyond that. 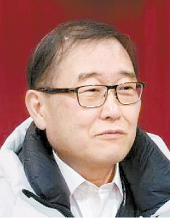 Korea will mark the first anniversary of the first Winter Olympics on its home soil Saturday. PyeongChang and Gangneung, both in Gangwon, hosted nearly 3,000 athletes from 92 nations, from Feb. 9-25 last year.

Korea has yet to decide what to do with venues post-PyeongChang, with Gangneung Hockey Centre, newly built to host the men’s and women’s tournaments during the Olympics, among those in limbo.

And under Chung’s leadership, the KIHA has taken it upon itself to come up with viable after-use plans for the rink.

For starters, the arena this week hosted the Legacy Cup, a three-day tournament featuring Latvia, Japan and Kazakhstan, which is set to wrap up later Friday. It’s the first international competition at this venue since the Olympics.

In an interview with Yonhap News Agency on Thursday at the arena during the Legacy Cup, Chung said the KIHA won’t let anyone else determine the future of hockey in the country.

“We all understand the importance of Olympic legacy, and we all believe this arena has to be used only for hockey,” Chung said. “We can’t just be sitting around and waiting for the government to help us. This is our sport, and we have to take the initiative and responsibility.”

During its general assembly on Jan. 30, the KIHA drafted a resolution to develop Gangneung Hockey Centre into “the cradle for the development of Korean hockey.”

The KIHA has started gathering signatures from hockey officials, players and coaches for a petition to accomplish that goal. And it set up a booth for hockey fans to also sign the petition and join the drive.

But Chung isn’t so naive as to believe signatures alone will get things done. He will commission an independent organization to conduct a feasibility study for the arena, with hopes of producing plans to keep the rink busy.

“It’d be great to have a team based here and use the arena as its home,” Chung said. “We’ll also try to get teams from overseas to train at this rink before competitions. We expect to have some countries come over here to practice before the 2022 Winter Olympics in Beijing.”

Whether Korea will play in Beijing remains to be seen. Korea didn’t have to qualify for PyeongChang 2018 because it received a spot as the host country. And it was thoroughly overwhelmed in losing all four games, scoring three goals and giving up 19. It’ll face an uphill climb to qualify for the next Olympics.

Still, Korea has made significant progress under the guidance of former National Hockey League (NHL) defenseman Jim Paek since 2014. It has risen from 23rd to 16th in the world rankings and competed in the highest division of the International Ice Hockey Federation (IIHF) World Championship for the first time in 2018.

Chung admitted it’s been difficult to maintain the same level of play over the past year or so, with national team mainstays getting older and the country’s shallow pool of talent not providing sufficient up-and-comers.

Following the Olympics and the world championship debut in 2018, hockey still didn’t take off in Korea as it was expected in some quarters.

“My dream is to turn Gangneung into a hockey town,” he said. “I hope to see the day when people think of Gangneung, they’ll think of hockey.”