One year on, many naturalized stars are long gone

One year on, many naturalized stars are long gone

In the run up to the 2018 PyeongChang Winter Olympics, Korea granted citizenship to 16 athletes from around the world, hoping that the special naturalizations would help the host nation reach new heights in the medal table. 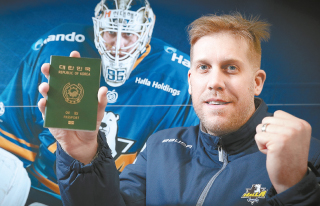 That didn’t quite go to plan. Korea ended the Olympics seventh in the table with five gold, eight silver and four bronze medals, a considerable improvement from the previous Games, but with very little help from the country’s newest athletes.

Not one of the naturalized athletes won a medal at PyeongChang, and when the Games came to an end, 7 out of 16 athletes headed back home, with some even giving up their Korean citizenship.

The swift departure did not sit well with the public. Before the Games began, there had been a lot of criticism over the naturalizations, with fans claiming the athletes just wanted to compete and didn’t care about Korea. Although many athletes refuted that claim, the exodus at the end of the event told a different story.

Cross country skier Kim Magnus was the first to leave. Kim, who was born to a Korean mother and Norwegian father, had dual citizenship and chose to represent Korea at PyeongChang.

In preparation for the Winter Games, Kim set high expectations by winning Korea’s first gold medal at the 2016 youth Winter Olympics and the 2017 Asian Winter Games. But at the Olympics, he failed to perform, finishing 45th in the 15-kilometer free event, 47th in the 50-kilometer mass start and 49th in the 1.4-kilometer sprint.

After the disappointing finish, Kim announced that he would register as an athlete under Norway’s ski federation in the 2018-19 season as he wanted to improve his competitiveness under Norway’s training system. Although Kim is not technically a naturalized athlete, his decision came as a big disappointment to fans.

Figure skating ice dance pair - Min Yu-ra and Alexander Gamelin - were the next to leave. Although the pair finished far from the podium, they still left a strong impression with fans by performing to Korean folk song “Arirang” while wearing hanbok, traditional Korean clothing. After the performance, fans showed their support for the pair by donating money on their online fundraising page to help them continue performing in the upcoming season. However, the pair announced that they have parted due to conflict over the money they had raised in July.

In September, Min announced her new partner Daniel Eaton. While Min has dual nationality, Eaton is American. It is unclear if the two will skate for the United States or if Eaton could be naturalized. Gamelin, who was naturalized ahead of the Olympics, retains his Korean citizenship but is unlikely to skate for Korea without a new Korean partner.

In biathlon, two of the four biathletes returned to Russia. Ekaterina Avvakumova left as she failed to adjust to her life in Korea while Aleksandr Starodubets left before the Olympics started due to a back injury.

The women’s ice hockey team also saw naturalized players return home, in part because the creation of the inter-Korean women’s ice hockey team severely interrupted the Olympics that they had expected to have. The inter-Korean team lost all its games, and three of the naturalized players - Randi Heesoo Griffin, Danelle Im and Caroline Park - quickly headed home after the Games to continue their education.

While many naturalized athletes have packed their stuff and headed back home, there is one notable exception. The Korean men’s ice hockey team goaltender Matt Dalton hasn’t fallen out of love with Korea. Dalton was the first athlete to earn Korean citizenship through special naturalization ahead of the Olympics.

After Korea made its Olympic debut at PyeongChang, Dalton said he received a lot of offers from foreign teams and leagues, but instead he insisted on playing for Korea. Since the Olympics, Dalton continued playing for the national team and also for Anyang Halla, a Korean professional ice hockey team that plays in the Asia League Ice Hockey.

“It’s important to me to do whatever I can to give back,” Dalton was quoted as saying on Yonhap. “Whatever they ask me, I am willing to give back to Korean hockey and do everything to help built it.”

The men’s ice hockey team has granted seven citizenships through special naturalization in total, and only one player, Brock Radunske, no longer plays for the national team. Radunske retired after playing 10 years for Korea, becoming a driving force behind the improvement of the sport here.

Just like Radunske, Dalton has made it clear that he didn’t naturalize just to compete at the Olympics. He said his decision to play for Korea was made after he realized that he can play a big role in improving ice hockey in the country.

As he hoped, Korea made big improvements with Dalton and six other naturalized players. Korea earned its first win against Japan in 34 years at the 2016 Division I Men’s World Ice Hockey Championships and again at the Euro Ice Hockey Challenge in February 2017. Then, Korea defeated Kazakhstan for the first time in 22 years at the International Ice Hockey Federation (IIHF) World Championship Division I Group A.

During the Olympics, Korea lost all their games but were still complimented for their performance against top-ranked teams.

Although Korea hasn’t performed as well after the Games, the naturalized ice hockey players are continuing to help develop the sport in Korea with a generation change.

“We have a different team than we‘ve had in the past,” Dalton was quoted as saying. “It’s a good challenge for us. We have a lot of young guys who haven’t played with Jim [Paek] before. We’re trying to get the system down.”