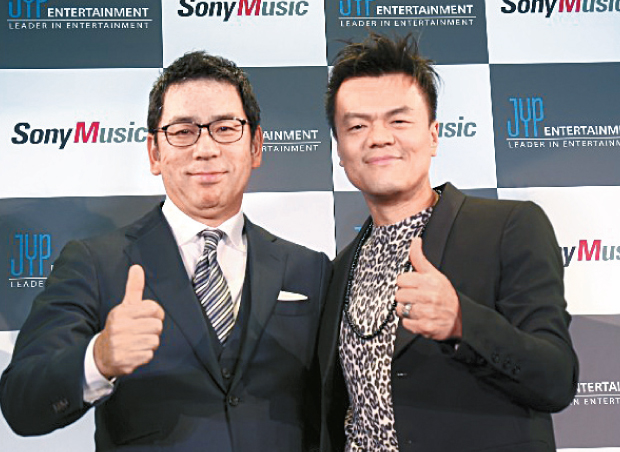 JYP Entertainment will launch a new girl group in Japan with Japan’s SONY Music through a project titled “Nizi Project,” the head of the agency, Park Jin-young, right, said at a press conference held in Tokyo on Thursday.

In a joint press conference held at SONY Music’s Tokyo headquarters, Park, the agency’s director Jeong Wook and Muramatsu Shunsuke, the director of SONY Music, left, revealed that the two companies will launch a new girl group in Japan by November 2020.

Nizi means rainbow in Japanese and is meant to symbolize the colorful diversity of the new group’s members.

“Step one was to export Korean content and K-pop overseas,” said Park to the Japanese press. “The second step was to find foreign talent and put them together with Korean artists. And now the third is for us to nurture and produce talent overseas.”

Park gave a 10-minute presentation in Japanese, impressing local press, according to the agency.

“We will be holding auditions beginning this July, in eight Japanese regions and two locations in the United States, and I will be attending myself,” said Park.

The auditions will begin in Sapporo, and continue on to Sendai, Tokyo, Nagoya, Osaka, Hiroshima, Fukuoka, Okinawa, Los Angeles and end in Hawaii. A total of 20 girls will be selected, and the process will be filmed and broadcast on a TV show set to air in October.

“They will be trained at the Korean JYP Training Center for six months and make their debut in November 2020,” said Park.

“I was very impressed by Park Jin-young’s passion for music, and we are very happy to be able to work with JYP Entertainment and their excellent training system,” said Muramatsu.