LEE DONG-HYEON
The author is the deputy industrial news editor of the JoongAng Ilbo. 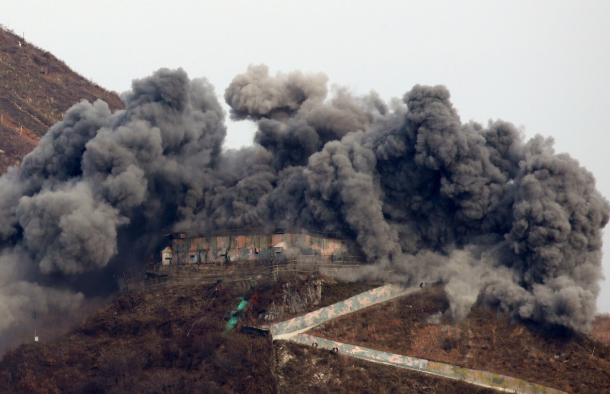 The demilitarized zone doesn’t make sense. After the armistice was signed in 1953, South and North Korea constantly denounced each other for bringing in heavy firearms and violating the armistice agreement. In fact, there were countless volatile clashes.

Unlike the name, the demilitarized zone is heavily armed with conventional weapons. However, the truce agreement does not define which heavy firearms are banned.

A clause is included in the supplementary agreement of the Military Armistice Committee. It states that soldiers can be armed with rifles and handguns. Minimal weapons are also allowed to prevent accidental clashes.

At the time, the agreements did not contain weapons that would be developed in the future. During the Korean War, the South Korean forces and UN forces as well as North Korean and Chinese forces did not carry automatic rifles as personal weapons. It was in 1958 that the North Korean military began producing AK-47 rifles developed by the Soviet Union — the firearm is called the “58-type rifle” in North Korea.

Korea received M16A1 rifles from the U.S. forces during its participation in the Vietnam War and began licensed production of the firearm in 1974.

Because a limited number of people have had access in the demilitarized zone, the forest in the area has been preserved for 60 years. I served in the Dongbu front guard post, which stands like a remote island in the vast forest.

When I looked out from the elevated post of the guard post, black kites flew over the endless forests and mountain goats ran around the cliffs. I witnessed the four seasons of the demilitarized zone for 26 months of my mandatory military service.

A boar family would block the road and take a nap. Hen pheasants would follow me around like a pet. Dandelions and wild flowers would grow up to my waist only half a day after weeding. An elk jumped into the barracks during an evening roll call. Unrealistic moments overwhelmed reality.

South and North Koreas closed 11 guard posts last year. The soaring guard post facilities were demolished and cross-verified. Heavy firearms aiming at each other have also disappeared. While many conventional weapons remain, it is not just in my imagination that the demilitarized zone will return to being a peaceful virgin forest as the name suggests.

The news of the second North Korea-U.S. summit that broke over the Lunar New Year holiday enhances expectations. While there are many obstacles to overcome, we need to also think about how to preserve the forest in the demilitarized zone after the fear of war that has haunted us for half a century disappears.