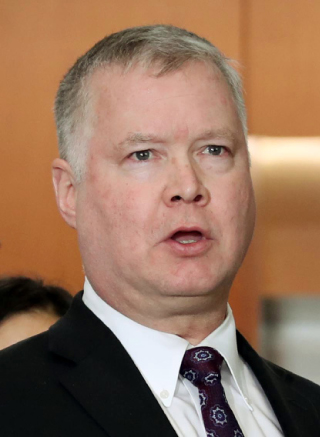 Stephen Biegun, the U.S. special representative for North Korea, continued talks in Pyongyang for a third day Friday, preparing for a second summit between the two countries’ leaders at the end of the month in Vietnam.

Biegun concluded a three-day visit to Pyongyang and arrived at South Korea’s Osan Air Base in Gyeonggi Friday evening on a U.S. military plane, confirmed the South Korean Ministry of Foreign Affairs.

Biegun kicked off a visit to Pyongyang on Wednesday for talks with North Korean counterpart Kim Hyok-chol, a former ambassador to Spain, to fine-tune details ahead of the upcoming summit. Biegun’s exact schedule had not been made public.

U.S. President Donald Trump announced in his State of the Union speech Tuesday that his second summit with North Korean leader Kim Jong-un will be in Vietnam on Feb. 27 and 28 as a part of a “bold new diplomacy” to push for “peace on the Korean Peninsula.”

North Korea is seen as pushing for the capital of Hanoi to host the summit while the United States prefers Da Nang, a central coast city.

In talks in Pyongyang, the two sides are expected to be fine-tuning details for the summit along with closing in on an agenda including what Washington may offer as incentives for denuclearization to the North.

Biegun was expected to brief South Korean and Japanese officials on his talks in Pyongyang after he returned to Seoul. Kenji Kanasugi, director general of Asia and Oceania affairs at Japan’s Foreign Ministry, was set to visit Seoul from Friday for a two-day trip.

Robert Palladino, a deputy spokesman for the U.S. State Department, said Thursday in a briefing in Washington that Biegun’s talks with Kim Hyok-chol are to prepare for the second summit and make “further progress” on commitments made in the first North-U.S. summit on June 12 in Singapore.

These commitments include, Palladino said, a “complete denuclearization, transformation of the United States-North Korea relations and building a lasting peace mechanism on the Korean Peninsula.”

However, no further details of the North-U.S. working-level talks have been revealed.

Palladino emphasized that Washington’s goal remains achieving the “final, fully verified denuclearization,” or FFVD, of North Korea, the same as at the first Kim-Trump summit, but that “much work remains.”

North Korea has said that it could dismantle its Yongbyon nuclear facilities and more, according to diplomatic sources. Biegun said in a speech at Stanford University last week that Kim Jong-un has indicated that this could include the dismantlement of North Korea’s plutonium and uranium enrichment facilities in return for the United States taking corresponding measures. Such corresponding measures could include establishing liaison offices ahead of forging formal diplomatic ties or creating a consultative body to discuss a peace treaty.

The United States could also be dangling the possibility of economic incentives.

When asked if the United States will prepare any incentive such as an economic package for the North, he replied, “We’ve always been clear that one of our goals here is a brighter future for the North Korean people.”

He added that Washington remains “united in enforcing and in implementing the United Nations sanctions” until FFVD is achieved, adding that “sanctions relief will follow denuclearization.”

Thanking Vietnam for hosting the second summit, Palladino noted that the “history of our two nations reflects the possibilities for peace and prosperity” and moving past “conflict and division towards the thriving partnership that we enjoy today.”

When asked if the issue of a declaration of an end to the 1950-53 Korean War, which ended with an armistice agreement, will come up at the summit, Palladino said reservedly, “We’re very much focused on setting it up.”

“In his State of the Union address, Trump announced the next chapter of his ‘bold new diplomacy’ with Kim Jong-un in a ‘historic push for peace’ on the Korean Peninsula,” said Leif-Eric Easley, an associate professor of international studies at Ewha Womans University. “Notably absent were any mention of human rights, sanctions implementation, alliance exercises for military deterrence and achieving concrete steps toward North Korea’s denuclearization.”

Rather than this being an indication that Washington is lowering the “bar for success” on North Korea, Easley said, “Clearly, there is an effort to provide diplomatic space for working-level progress before the second Trump-Kim summit and while Special Representative Biegun is in Pyongyang for talks.”