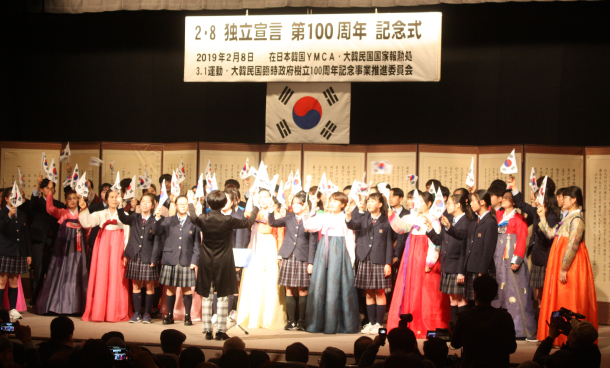 A Tokyo Korean School choir performs a commemorative song during a centennial ceremony for the February 8 Independence Declaration at the Tokyo Korean YMCA in the Japanese capital on Friday. [YONHAP]

Korean residents in Japan held a ceremony in Tokyo on Friday to mark the centennial of the February 8 Independence Declaration, organizers said.

The ceremony was held at the Tokyo Korean YMCA building in the city’s Chiyoda ward in the morning under the sponsorship of the Korean YMCA in Japan and the South Korean commemoration committee for the Feb. 8 declaration’s centennial anniversary, they said.

The ceremony included the performance of a commemorative song for the Feb. 8 declaration, commemorative addresses and three cheers for Korea.

Historians say the February 8 Independence Declaration was a significant part of Korea’s fight a century ago to gain independence from Japan’s colonial rule.

On Feb. 8, 1919, some 600 Korean students issued a declaration of Korean independence from colonial Japan at a rally held in the heart of Tokyo.

They also adopted a series of resolutions demanding independence for their country.

The Tokyo rally is credited with paving the way for the March 1 Independence Movement across Korea and the establishment of Korea’s provisional government in Shanghai.

The centennial ceremony was attended by a number of officials and former independence fighters from Seoul, including Minister of Patriots and Veterans Affairs Pi Woo-jin; Han Wan-sang, co-chairman of the Presidential Commission on the Centennial Anniversary of the March 1st Independence Movement and the Korea Provisional Government; Lee Jong-geol, head of the commemoration committee for the Feb. 8 declaration’s centennial anniversary; and South Korean Ambassador to Japan Lee Su-hoon.

Pi gave an address to reflect on the historical meaning of the Tokyo independence declaration.

“South Korea and Japan should correctly remember their shared history and cooperate to heal the pain of the victims in order to move towards a future-oriented relationship,” Pi said.

Lee Jong-geol, a lawmaker from the ruling Democratic Party, also called for closer relations between Seoul and Tokyo in his address, while Ambassador Lee proposed the two countries continue to strive for a future-oriented relationship and pool their wisdom to resolve pending issues and mutual conflicts.

On Thursday evening, Korean residents and students in Japan held a ceremony in Tokyo to celebrate the eve of the centennial of the historic independence movement.

In Seoul, the South Korean commemoration committee for the Feb. 8 declaration’s centennial anniversary and organizations of former independence fighters held a separate ceremony and a special lecture at the Seoul YMCA building on the day to remember the historic event.

Vice Minister of Patriots and Veterans Affairs Lee Byeong-goo gave an address at the ceremony, saying the Feb. 8 declaration in Tokyo was an immense encouragement to those in Korea who had been seeking means to launch a nationwide independence movement.

Following the ceremony, Lee Deok-joo, a senior member of the Seoul YMCA, gave a special lecture on the past, present and future of the spirit of the Feb. 8 declaration.

Meanwhile, President Moon Jae-in issued a special social media message on the occasion of the Feb. 8 declaration’s centennial anniversary, saying the declaration of independence by Korean students in Tokyo had a direct impact on the March 1, 1919, independence movement throughout Korea.

“Young Korean students condemned the Japanese militarism and clamored for their country’s independence for the sake of peace in the world as well as in Asia. Today, the centennial ceremonies are held in Tokyo and Seoul at the same time,” Moon said, adding that he will remember all the young Korean independence fighters.