Nichkhun, a member of boy band 2PM, will release his first Korean solo album on Feb. 18, according to his agency JYP Entertainment. It’s been 11 years since he debuted on the entertainment scene in Korea. 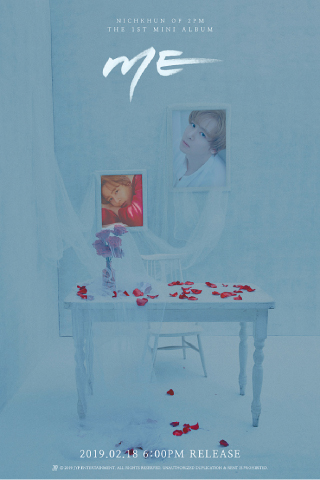 To signal a new start for the singer, the agency released a teaser image, above, Sunday through its social media channels. The album is titled “ME.”

The singer released an album with the same name in Japan in December. He celebrated the release with his first solo concert “Nichkhun (From 2PM) Premium Solo Concert 2018 ‘Home’” in Osaka and Tokyo.

The release of the album precedes the local opening of a Thai movie in which he stars. “Brother of the Year,” which premiered in Thai theaters last May, will hit local theaters in March. He plays a lead in the comic drama who tries to keep a romantic relationship going despite rising troubles.

Before getting his gigs lined up for local fans this month and next, Nichkhun has been working across Asia. He had fan meets in Beijing in October and Nanjing, China, in November, and also played a lead character in Chinese drama “Shall We Fall in Love.” He was also honored with an award last month at the 2019 Fashion and Entertainment Influence Awards (FEIA) Awards.