The battle for Euljiro is not over yet: As city government reconsiders plans,different sides call for restoration and redevelopment

The battle for Euljiro is not over yet: As city government reconsiders plans,different sides call for restoration and redevelopment 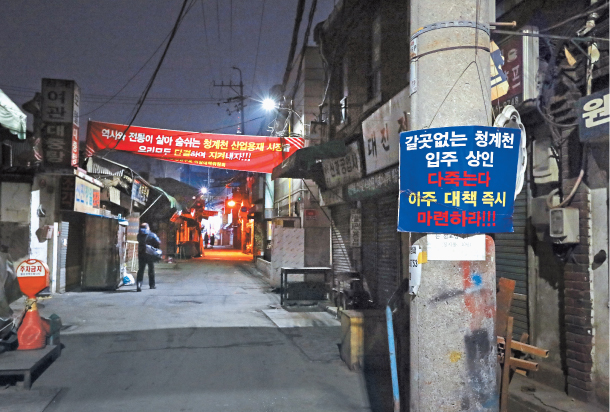 Some neighborhoods, like central Seoul’s Bukchon, offer a glimpse of the city centuries ago, with small, winding streets lined with hanok, traditional Korean style homes. Other parts of the capital offer a contrasting vibe - the shiny skyscrapers of Gangnam, southern Seoul, are from a completely different world.

With huge areas of Seoul rushing to modernize and build their own shiny skyscrapers, the question is; what needs to be preserved for future generations?

The ongoing debate over Seoul’s redevelopment has once again risen to the fore on social media after the news broke that some of the most iconic old Korean food restaurants will soon be torn down to make way for new buildings in central Seoul’s Euljiro district.

The area is home to a number of famous restaurants, including Eulji Myeonok, a Pyongyang-style naengmyeon (cold noodles) spot, as well as Yang Miok, a restaurant that serves grilled beef intestines.

The redevelopment project was originally planned in 2006 under former mayor Oh Se-hoon and went through some changes in 2014 under current mayor Park Won-soon. It proceeded slowly without much attention from the public until the fate of these restaurants increased awareness. The 2014 plan was focused more on restoring some of the older buildings than completely demolishing them in order to keep the vibe cultivated in the late 20th century when the neighborhood’s tool shops played a crucial role in the rapidly growing economy.

The Seoul city government reacted quickly to the recent criticism of the existing plan. Park announced last month that the city will review the regeneration plan entirely and the government is in the process of inviting an expert group to analyze what needs to be added or dropped from the current plan to revamp the area.

A city government official told the Korea JoongAng Daily the 2014 plan was “insufficient” regarding ways to preserve such storied restaurants as well as other stores and buildings that could be of historical importance to future generations. At the moment, it is uncertain when the neighborhood will actually be revamped and how.

“The government intervention is necessary,” said Oh Seung-jae, director of the city government’s historic city center regeneration division, explaining that the local authority will review more details on what to do with current tenants who will lose their workplaces and whose cultural heritage is under threat.

Although approval for the redevelopment or restoration of the area has been given, there is still room for the plan to be scrapped. The most controversial area is district No. 3, home of the most famous restaurants.

The city already completed the redevelopment of the Sewoon, Cheonggye and Daelim Arcades last September and was ready to move south to the Sampoong, Inheyon and Jinyang Arcades, Hotel PJ and the surrounding alleys, but work has now stopped. The confusion mainly began as the 2014 alteration didn’t include the “restoration” of all the buildings of Euljiro, only some. According to the Seoul city government’s Oh, there are areas that are designated to be restored and areas set to be redeveloped. That means some buildings will be demolished. The difficult task is making all the work proceed harmoniously.

From left: Old signs direct customers to shops and restaurants in alleys around Euljiro, central Seoul; buildings next to Cheonggye Stream that are scheduled to be demolished; The interior of Clazic, a retro cafe that has recently opened in Euljiro; a passerby walks through an alley filled with printing and tool shops in Euljiro. [PARK SANG-MOON, JOONGANG ILBO]

In recent years, old restaurants and neighborhoods popular with elderly consumers have become popular with a new generation of Seoulites. Small alleys covered with electric wires, half-torn advertisements on cement walls and broken windows have been rejuvenated by hip cafes and bars, with many of the most popular hidden in Euljiro’s tiniest alleys.

The inconvenience of hunting for Seoul’s newest hot spots, hidden in dark old buildings around Eulji-ro 3-ga Station, hasn’t kept away the hordes of young people looking to hang out in a retro space that is difficult to find elsewhere in the city.

Things that might have been labeled old and boring in other places become part of Euljiro’s retro identity, and the old Korean restaurants in the neighborhood also benefited from the new-found popularity.

The local district office has also done a lot to attract visitors to buildings that until recently were pretty much abandoned. From April 2016, Jung District began Eulji Yuram, which translates to traveling around Eulji, offering a guided tour around the area. At the same time, the district office also encouraged young artists to move in to the neighborhood with cheap monthly rent for studio space.

An official from the district said the authority tried to fill up the empty area even though the alleys were scheduled to be redeveloped as it couldn’t just leave the buildings empty. When the district office set up new programs and invited artists to move in, they made it clear that leases could suddenly end if redevelopment began.

Even the Seoul city government tried to protect some buildings, designating well-known spots as Saenghwal Yusan, which roughly translates to living heritage. Both Eulji Myeonok and Yang Miok have been labeled Saenghwal Yusan, although the designation does not have any legal ramifications. As the recent drive to make the neighborhood more vibrant appears to have worked, questions have been raised over the city government’s policy - appearing to try and breathe new life into the neighborhood with the Saenghwal Yusan designation while simultaneously planning to redevelop it. 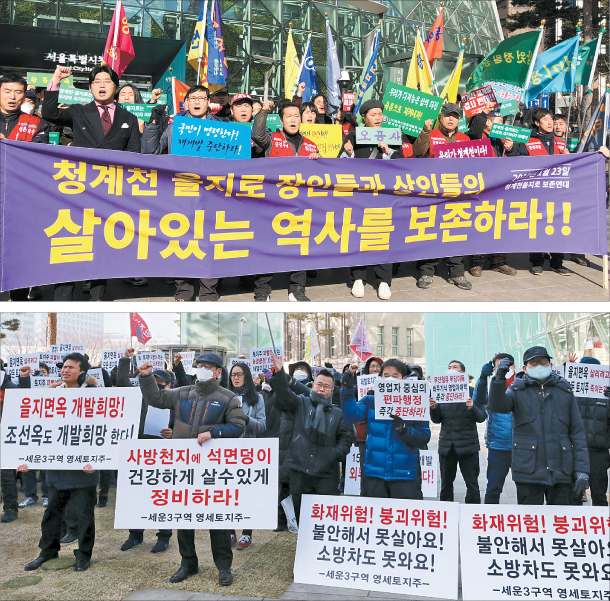 Two different protests on Euljiro restoration and redevelopment projects are held in front of the Seoul Metropolitan Government on Jan. 23, after Mayor Park Won-soon said the city will review its 2014 plan. Top: protesters ask the city to restore, not redevelop, the area. Above: protesters blame the city for the delay. [NEWS1, NEWSIS]

Breaking up the community

What made Euljiro unique in recent years was the existing industrial and manufacturing areas filled with printing or electric shops that still operate today. If those shops are moved out of the area, the charm of the surrounding cafes and bars could also take a hit.

Most of the merchants are tenants leasing the space, and the landlords are the ones at the negotiating table when it comes to redevelopment ideas. The disconnected landlords are more likely to be swayed by private companies planning to build high rises that offer both residential and commercial space in the area. If those redevelopment plans go ahead, Euljiro - once such a symbol of Korea’s burgeoning commerce that an old joke says you can walk around the neighborhood and pick up everything you need to make a tank - could lose the very shops that put it on the map.

“There has been no social agreement whether such areas need to be kept or not,” said Nam Eun-kyung, manager at the Citizens’ Coalition for Economic Justice. “Whether the rest of the area will be completely redeveloped or simply restored needs to be more thoroughly announced.”

The idea of moving into a new building constructed to house these merchants isn’t really welcome among those that already work there. These shop owners have already seen similar redevelopment projects in the area fail and they don’t want to share the same fate as their former neighbors.

Garden Five, an entertainment and shopping complex in Songpa District, southern Seoul, was originally built to relocate merchants who ran shops alongside Cheonggye Stream, central Seoul, but the units inside the building weren’t designed for those industries. Some machinery equipment that vibrates couldn’t be used inside the building and there was no provision made for these merchants.

Many of the original merchants who moved to the Songpa building have now returned to Euljiro or the surrounding area. This is not only due to the inadequate development of the new building, but also because the businesses in Euljiro rely on one another. Most shops design different components that work with those created by other stores in the area - as such they tend to team up to fulfill orders.

“The future is so uncertain,” said Han Jin-ho, who has run his interior construction shop for over 30 years in Euljiro. “The work here is all connected from one shop to another, and once we are all kicked out and scattered to other industrial places, that will only result in raising the prices to make things.”

There is now an online community where these merchants share updates on their dealings with landlords or other officials related to regenerating the area in order to better prepare for what’s to come.

The Citizens’ Coalition for Economic Justice and other social workers have tried to invite experts to talk about ways to keep the industrial ecosystem and the historic and cultural content alive. Shim Han-byul, Seoul National University Asia Center’s research fellow specialized in urban planning, argued at a talk last month that the current manufacturing industry has evolved to provide services necessary in the city center.

On Jan. 23, two very different protests were held in front of the Seoul Metropolitan Government in central Seoul: one urging the city government to reconsider its redevelopment plan, while the other wanted to expedite it.

While many people support the those working at stores in the area, there are some landlords who are happy for the redevelopment to proceed so they can make money. Some have family members who can no longer work in the area and are looking for a speedy redevelopment, while others look forward to a better work environment.

The Seoul city government’s Oh said it’s been only a few weeks since Mayor Park commented on the review of the ongoing development and restoration plan, so the city will soon make a timeline to collect additional information on the future of Euljiro.