It’s Shin Ramyun, but not as we know it

It’s Shin Ramyun, but not as we know it 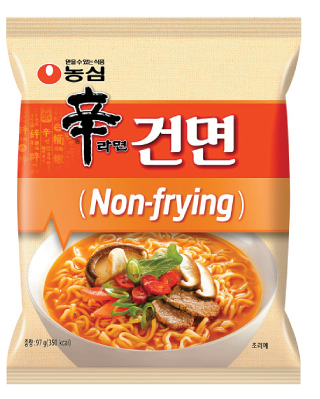 Korean noodle maker Nongshim plans to bolster its presence in the non-fried noodle market with a new variation of its bestselling Shin Ramyun instant noodles.

Non-fried noodles have been gaining popularity among younger consumers that lean toward healthier and lower calorie food options.

While cup noodles typically use noodles that are deep-fried, Nongshim has been looking for healthier alternatives. Last year they released a spaghetti version of a cup noodle that used wind-dried pasta instead of fried.

“The third generation Shin Ramyun maintains the identity of the original noodle brand, but has been upgraded with a healthier non-fried noodle,” said a Nongshim press officer.

The non-fried variety is healthier than the original, containing 350 kilocalories, or 70 percent of an equivalent pack of the original Shin Ramyun.

As a focus on healthier food options has grown among younger consumers, the non-fried noodle market has steadily increased. Non-fried noodles were first introduced in 2008 with Nongshim’s Doongji cold noodles and Hooroorook Kalguksu. By 2010, the market was worth 50 billion won ($44 million) and by 2018 it had shot up to 117.8 billion won. Nongshim controls 40 percent of the market, followed by Pulmuone and Ottogi.

Nongshim isn’t the only noodle company that has found success with healthier options.

“The product is hot among the younger generation who pursue a healthy lifestyle,” said a source from Ottogi. “The transparency and chewiness of the noodles are one of the features.”

Nongshim expects the growing popularity of non-fried noodles to continue to increase.

“Recently, many people look for non-fried noodles, like cold noodles, kalguksu and rice noodles,” A press officer from Nongshim said. “Non-fried noodles are expected to expand the scope of instant noodles market that was stagnant for a long time.”