Samsung dreams of a future filled with 8K TVs

Samsung dreams of a future filled with 8K TVs 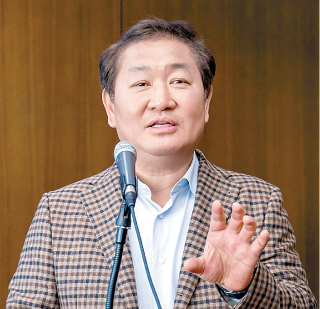 Samsung Electronics will expand its lineup of 8K televisions this year, hoping to launch the premium products in 60 countries around the world.

8K televisions have four times more pixels than 4K, which until recently was the most cutting-edge screen a high-end television could have. When compared to a 4K TV, 8K screens are brighter with more color contrast and sharper edges. Samsung released its first 8K television last year.

Han Jong-hee, Samsung’s president in charge of the visual display business, said in a press conference Friday that he expects 2019 to mark the start of a new era where 8K becomes the new norm in the high-end television market.

“4K grew to take up 60 percent [of all Samsung TV sales] in five years - I expect 8K to show a similar level of performance, maybe faster considering how tech develops so fast these days in all sectors including content and displays,” he said at the event held in Samsung’s Suwon complex in Gyeonggi.

The company’s 2019 goal for 8K TVs is to reach a double-digit year-on-year growth rate for market share in the local high-end TV sector. Han says the goal is “reachable,” adding that half of the large Samsung televisions sold in the country after November were 8K. That month, Samsung started local sales of the product.

Regarding its global business, the QLED 8K started selling in Europe, Korea, the United States and Russia last year. Tomorrow, the company will unveil new models for 2019 at the Samsung Forum, a showcase event for clients that simultaneously takes place in various regions around the world.

This year’s plan is to launch sales in 60 countries.

It remains to be seen whether Han’s optimistic views on 8K television will come to fruition as quickly as he projects. Even if 8K TVs exist, the higher definition and the high price it comes at won’t be of much use if video content remains at the 4K level.

“5G networks will spread this year and the demand for 8K content will go up as well,” responded Han when asked about the problem. Han particularly expressed anticipation for the 2020 Tokyo Olympics. Japan’s national broadcaster NHK plans to live stream the games worldwide in 8K.