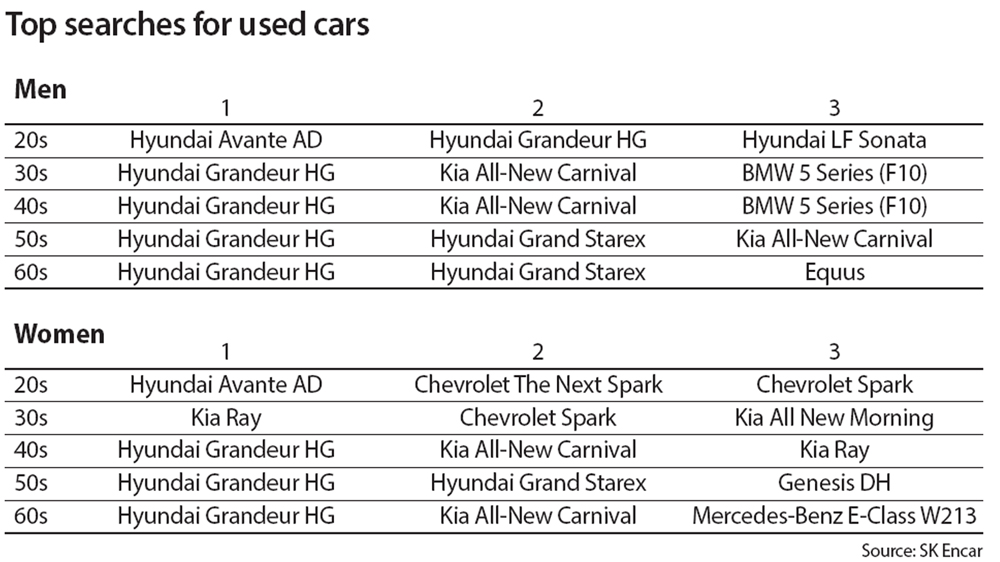 SK Encar, an online secondhand car site, did a survey of preferences for used cars by Koreans and the results showed some definite trends.

Men in their 20s showed a sharp interest in midsize sedans. The best-selling second-hand car among men in their 20s were Hyundai Motor’s Avante AD and the BMW 3 Series (F30).

“People in their 20s who are purchasing their first car tend to have a strong interest in mid-sized sedans,” said SK Encar in a statement.

Among men in their 30s and 40s, the most popular cars were Hyundai Motor’s Grandeur HG, followed by Kia Motors’ Carnival and BMW 5 Series (F10), and then the Mercedes-Benz’s E-Class.

Compared to men, women had a higher preference for Korean cars.

Younger women in particular had a stronger preference for small, compact vehicles.

Women in their 20s like Hyundai Motor’s Avante AD, while women in their 30s preferred Kia’s Ray. By all age group, smaller cars ranked within the top five.

But women in their 40s had interests similar to men’s in the same age group.

The No. 1 secondhand car for women in their 40s was Hyundai’s Grandeur HG, while Kia’s Carnival came in second. The third to fifth ranking cars were also Korean cars.

SK Encar said this was because women purchase cars at a later age and they prefer vehicles that are more practical.

While both men and women shared a common interest in Hyundai’s Grandeur HG, when it came to imported cars, they split between BMW and Mercedes-Benz.

This trend could also be spotted in people buying new imported cars.

In the first half of last year, 34.1 percent of the women who bought new imported cars chose Mercedes-Benzes, while only 23.8 percent of men did.