No clarity on Biegun’s progress

No clarity on Biegun’s progress 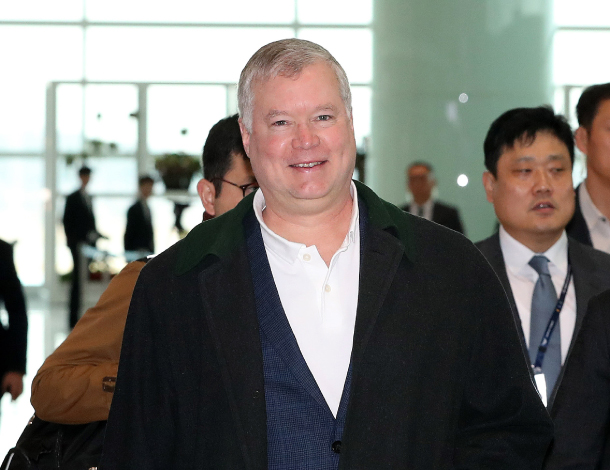 U.S. Special Representative Stephen Biegun’s recent trip to Pyongyang remained under a veil of secrecy over the weekend as South Korean officials hope for the best in the lead up to the second U.S.-North Korea summit in Hanoi, Vietnam, on Feb. 27 and 28.

Very little has been revealed about Biegun’s negotiations with North Korean officials, which wrapped up Friday after the nuclear envoy arrived in the pariah state last Wednesday, spending a total of 55 hours in the North. Biegun flew from Pyongyang to Seoul Friday evening and spent most of Saturday briefing South Korean officials about his trip before returning to the United States Sunday.

In a meeting with his South Korean counterpart, Lee Do-hoon, on Saturday at the Foreign Affairs Ministry in central Seoul, Biegun said in opening remarks that he had a “productive” set of discussions with North Korean officials and that his team “engaged on a number of areas of mutual interest,” but did not elaborate further before reporters were asked to leave the meeting room, as is customary in private government meetings.

Later that day during a meeting with South Korean Foreign Minister Kang Kyung-wha, Biegun said there was “some hard work to do with the DPRK now and then,” referring to the North by the acronym for its official name - the Democratic People’s Republic of Korea - but didn’t specify to reporters what difficulties remained.

South Korea’s presidential spokesman, Kim Eui-kyeom, said Biegun met Chung Eui-yong, director of the Blue House National Security Office, for 50 minutes Saturday from 4 p.m., saying they talked about the “results of the working-level talks” Biegun had in the North.

In a press briefing Sunday, spokesman Kim said he was aware Biegun was warmly welcomed in Pyongyang, and that he and his North Korean counterpart shared “in extreme detail” what they wanted from one another.

Biegun will hold another round of working-level talks with North Korean officials “in a third Asian country” other than the two Koreas next week, spokesman Kim continued.

The fact that the summit will be held in the Vietnamese capital of Hanoi appears to indicate that Washington made a concession to Pyongyang because, according to CNN, the United States favored Da Nang. It wasn’t until Saturday that the host city was announced by Trump on Twitter.

“My representatives have just left North Korea after a very productive meeting and an agreed upon time and date for the second Summit with Kim Jong-un,” Trump tweeted. “It will take place in Hanoi, Vietnam, on Feb. 27 and 28. I look forward to seeing Chairman Kim and advancing the cause of peace!”

In a follow-up tweet, Trump said that North Korea, under Kim’s leadership, will become “a great Economic Powerhouse,” adding that “He may surprise some but he won’t surprise me, because I have gotten to know him and fully understand how capable he is.”

In what appeared to be a reference to his previous mocking of Kim as a “little rocket man,” the White House chief continued that North Korea will become “a different kind of Rocket - an Economic one!”

It was the first time a host city for the second summit was revealed after Trump revealed in his State of the Union address last Tuesday that his meeting with Kim would be held in Vietnam on Feb. 27 and 28.

Citing a source familiar with the summit’s planning, CNN, at the time, reported that the host city was still being discussed between the two countries and that the North reportedly favored Hanoi in light of the fact that it had an embassy there.

The United States, on the other hand, reportedly favored Da Nang as Trump attended a meeting of the Asia-Pacific Economic Cooperation there in 2017, meaning the United States has already conducted a full security check.