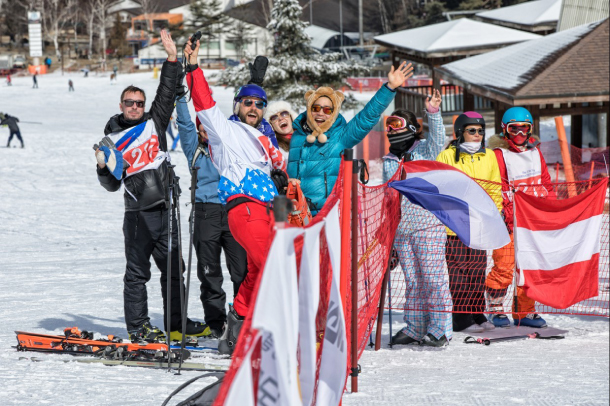 Participants in the 37th YongPyong International Ski Festival celebrate after their races at the YongPyong Resort in Pyeongchang County, Gangwon, Saturday, which was the first anniversary of the PyeongChang Winter Olympics. [YONGPYONG RESORT]

Just in time for the first anniversary of the PyeongChang Winter Olympics, some 150 people from the expat community in Korea gathered at the YongPyong Resort in Gangwon for an Olympics of their own over the weekend.

“We are 20 different nations gathered here tonight,” Danish Ambassador to Korea Thomas Lehmann told participants at a reception for the 37th YongPyong International Ski Festival. “I think that calls for a big Olympics taking place here on the very first anniversary of the PyeongChang Olympics.”

The international ski festival held every year at YongPyong Resort is organized by the resort and an organizing committee consisting of members of the diplomatic corps, U.S. Ski Patrol and others. Ambassadors take turns chairing the committee, with Lehmann as the current chair.

The festival is open to anyone of foreign citizenship residing in Korea. Participants compete in slalom alpine skiing or snowboarding in different age groups and are awarded based on their finishing times.

Within each group, the top three times received awards.

Gaspard Carrier, an 8-year-old from France, was one of them. He won second place among boys aged 8 and under in slalom skiing, which he finished in 22.10 seconds.

“Since I was 3,” he told a reporter when asked how long he’s been skiing.

In fact, it was Carrier’s third-time participating in the event and second time he took home a prize.

The ski festival has become a tradition every winter for many participants.

“This is my sixth time participating in the festival,” said Michael Schrodi, an Austrian engineer and a seven-year resident of Seoul. “I found out about it through a friend and have been coming back every year.”

“We are all here together from a German international school,” said Gerd Vetter, deputy headmaster of the Deutsche Schule Seoul International, central Seoul, who is participating in the festival for the third year. “We like to be part of the ski festival because we see it as an opportunity to come and spend time with our families and students. We hope to see more international schools joining in the future.”

The international ski festival brings together expats from all over Korea.

“There are expats from Geoje and Busan joining us,” said Kim Youn-young, president of the organizing committee of the festival, who also runs Woonsan Korean Restaurant, western Seoul.

The festival began 37 years ago as a casual get-together for foreigners in Korea. Around 100 people from five to six countries participated, according to YongPyong Resort.

“The idea came to fruition when a few people decided then to start hosting a ski event for foreigners in Korea,” Kim said. “Then year by year, it evolved into a family outing event among some expats.”

The athletes, their friends and their families celebrated in flying colors as they waved their countries’ flags at the award ceremony of the slalom competitions Saturday.

The three-day festival ended Sunday with a curling competition held at the curling center in Gangneung, Gangwon. The festival’s sponsors included Hyundai Motors and the Gangwon provincial government.