The Korean men’s short track team is back on top, winning the sixth leg of the International Skating Union (ISU) World Cup Short Track in Turin, Italy, on Sunday. 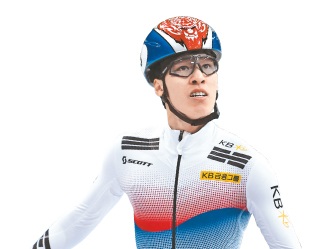 Hwang Dae-heon won gold in two races - 500 meters and 1,000 meters - while Kim Gun-woo and Lim Hyo-jun each picked up one gold.

Hwang started the event by winning the 500-meter race by clocking 41.128 seconds, .103 seconds ahead of Shaolin Sandor Liu of Hungary. Hwang added another gold medal in the 1,000-meter race, finishing ahead of his teammate Park Ji-won. Hwang clocked 1 minute and 27.257 seconds, .237 seconds ahead of Park. Hwang was the only male skater to win gold in two races.

Kim continued Korea’s winning streak by adding gold in the men’s 1,500-meter race on Saturday. Kim, the current World No. 1, clocked 2 minutes and 12.823 seconds to finish .404 seconds ahead of Hong Kyung-hwan.

Kim hoped to finish strong with another gold in the 500-meter race but ended up just behind Olympic gold medalist Lim, clocking 41.314 seconds. Kim finished .352 seconds behind Lim. By winning the race, Lim is now the World No. 1 in the men’s 500 meters.

With Lim’s gold, Korea took first place in all four individual races but failed to sweep the men’s tournament after being penalized during the semifinals of the 5,000-meter relay. As Hong and Park each won a silver medal, all five Korean male skaters who competed at this World Cup managed to make it to the podium.

The Korean men’s short track team had been making a comeback since the fifth leg of the World Cup, where the team also swept gold in the individual races.

Korea is a longtime powerhouse in short track. Of the 31 gold medals Korea has won at the Winter Olympics, 24 of them were won in short track. Both the women’s and men’s teams have been hugely successful, although Korea is better known for its female short track speed skaters.

From the men’s team, notable athletes include Kim Ki-hoon, who won two gold medals at the 1992 Games, Kim Dong-sung, who won 11 golds at the World Championships throughout his career, and Viktor An who won three golds at the 2006 Winter Olympics before defecting to Russia.

Lee Jung-su picked up two golds in Vancouver but, since the 2010 Vancouver Olympics, the men’s team had been struggling. Once An moved to Russia, Korea finished without a single medal in the men’s races in 2014 in Sochi.

At the 2018 PyeongChang Olympics, Korea was expected to take gold in all the races but only finished with one gold.

Although Team Korea didn’t do as well as expected, the men’s team performance was enough to convince fans that men’s short track speed skating was worth watching again as they won the most medals, at four. Korea finished with a gold, a silver and two bronze in the men’s races.

Following the Olympics, the team failed to win a single gold medal at the first leg of the World Cup, but slowly improved as the series went on.

The men’s success is even more promising as the team is younger than in previous years. This year, the Korean men’s short track team’s average age is 21, but they are just as experienced as the skaters from the past.

Both Lim and Hwang received medals at the Olympics and, aside from Lee June-seo, the youngest skater on the team, the other three skaters - Park, Kim and Hong - have regularly made it onto the national team.

Although there isn’t a dominant male skater as in previous years, Korea has high expectations at the upcoming 2022 Beijing Olympics, as all the team has the potential to receive medals in individual races.

As Korea had a strong finish at the last World Cup race of the season, the players will now train for the ISU World Short Track Speed Skating Championships, which will be held from Mar. 8 to 10 in Sofia, Bulgaria.

This is going to be the most competitive event of the season among the Korean skaters as the top finisher from the event will automatically be selected for the national Korean short track team for the 2019-20 season.