‘We need a strategy to compete against China’

‘We need a strategy to compete against China’ 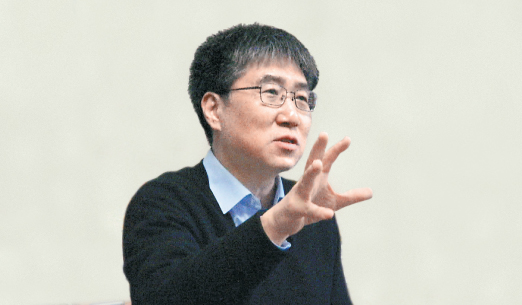 As China and the United States continue their prolonged trade negotiations without much progress, Korean experts are worried about the impact the dispute will have on Korea’s economy.

Prof. Chang Ha-joon, an economics professor at the University of Cambridge, believes the trade dispute between Korea’s two biggest trading partners has important repercussions for Seoul. As higher tariffs against China force it to advance and improve the quality of goods, the level of Chinese technology may quickly surpass Korean standards.

Chang warns that it’s crucial for Korea to come to an agreement as a country on which industries to invest in and which technologies or projects to develop.

The JoongAng Ilbo met Chang on Feb. 1 at his office to discuss the global trade war, its implications for Korea and other issues affecting the domestic economy, including conglomerates and the labor market.

Q. What’s your outlook for the world economy this year and next year?

A. Anyone will agree it will be slower than last year or the year before. There are too many uncertainties, such as Brexit and the U.S.-China trade war. Interest rates are at a record low and governments are financing deficits post-2008. Quantitative easing has led to housing and stock market bubbles while household debt continues to rise.

A patient recovering from a heart attack cannot stand further shocks. I’m not saying that something bad will necessarily happen in the next one or two years, but I’m worried for the weakened state of the economy.

What implications does the U.S.-China trade war have?

Though the United States is trying to bring China down, it’s unclear whether that will help. If the U.S. imposes tariffs on Chinese goods, China might export more luxurious products at a higher price, similar to how Japan introduced Lexus when the United States and Europe limited the number of vehicles it could export.

China can relocate its factories to Southeast Asia and use the resources available there to increase productivity.

Is China’s economy slowing down?

I don’t guarantee everything will go well for China. We don’t know how China will erupt if it posts low growth rates and inequalities widen.

After the yen appreciated nearly three times in value in 1985 under U.S. pressure, it brought along Japan’s lost decades. China might also face a similar fate with poor macroeconomic policies.

What does Korea need to do now?

We need to come up with a strategy on how to compete against and cooperate with China.

There is also no mechanism today that facilitates information exchanges and industrial policy-making between the Korean government and business.

We need to establish an organization for information exchanges and create documents proposing a unified vision regarding topics like economic development and industrial chemicals. We also need to discuss which renewable energy development - solar, wind or nuclear - to pursue and decide whether to increase the efficiency of fossil fuel engines or promote a shared vehicle system.

What’s your outlook for the Korean economy this year and next year?

In the short term, I think it’s just going to be mediocre.

Taking the population growth rate into account, Korea’s economic growth rate per person comes to 2.5 percent and Germany’s to 2 percent. Korea is not doing better by a large margin.

Rather than focusing on increasing the minimum wage by a few thousand won, we need to think of long-term issues, such as stopping China’s charge and building a country that’s a good place to live for everyone.

How should we address the issue of chaebol?

Koreans might be happy for a day if the Chung and Lee families of Hyundai and Samsung are forced out of their companies, but Koreans will suffer for 20 years if foreign shareholders take over domestic conglomerates.

When solving the question of chaebol, we need to think of the best solution for both the Korean economy and people.

Facebook founder Mark Zuckerberg owns less than 30 percent of the shares but holds more than half of his company’s voting rights. We can adopt a similar weighted voting system. There’s also the option of granting more voting rights to shareholders who hold their shares for a long time, such as in France and Italy.

What about shareholder capitalism?

Samsung began by exporting fish to Japan. After building a sugar refinery, it upgraded to manufacturing electronics, semiconductors and smartphones.

This couldn’t have happened if shareholder capitalism won out and Samsung’s affiliates were broken down into independent companies.

We need to reach a consensus to upgrade conglomerates. For example, we can consider the option of cutting the tax rate down from 60 to 25 percent if Samsung’s heir donates the company’s shares to the National Pension Service instead of paying inheritance tax after Chairman Lee Kun-hee passes away. The NPS can protect management rights for the sake of the domestic economy.

Some Korean taxi drivers committed suicide to protest the launch of carpool services. What can we do to prevent conflict over labor issues?

That’s why the government’s role is so important. Universal welfare is the solution.

In Sweden, workers who lose their jobs receive 60 to 70 percent of their regular income levels for two years and receive education to find other jobs. Workers there don’t protest when new technologies are released.

In Denmark, the maximum income tax rate is 58 percent, yet people do not demonstrate. It’s because people who pay a lot in taxes also receive health, child care and education benefits.

Korea should build a welfare state and restructure the labor market by reeducating workers. Perhaps we will even see corporate tax rates rising by 1 percentage point if we reach a compromise with businesses.