HA HYUN-OCK
The author is the deputy financial news editor of the JoongAng Ilbo. 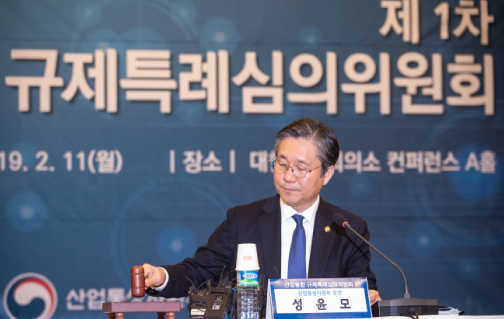 Minister of Trade, Industry and Energy Sung Yun-mo kicks off the government’s first meeting aimed at accelerating deregulation of industries on Feb. 11. [NEWS1]

What if the Korean economy did not have semiconductors? It would be in trouble, according to simple numbers. Last year, semiconductors took up 20.9 percent of total exports. While major industries, such as automobile and shipbuilding, struggled, semiconductors remained the mainstay of the economy. Samsung Electronics topped semiconductor revenue in the world for two consecutive years, in 2017 and 2018, leading the “semiconductor one-man show.”

What is semiconductors’ secret to success? Some joke that it’s because the semiconductor industry began when government officials didn’t know what it was. It could be successful because the businesses began before government regulations. If bureaucrats had known about semiconductors, they would have implemented so many regulations that they may not have been so successful. Businesses’ demands to the government are consistent. They always call for deregulation. While regulations are necessary for society as a whole, companies starting new businesses or services often find them burdensome. Outdated regulations that don’t fit the times could hinder businesses and make them fall behind in the competition.

Recently, the government has been letting businesses breathe with a “regulatory sandbox.” It’s a system that waives regulations for a certain period of time so companies can pursue creative ideas to nurture new industries. Companies can experiment the utility of new technologies and services. The government can regulate if problems arise later. It was first introduced in Britain in 2015 to promote the fintech industry and other countries, such as Japan, followed suit.

A sandbox — a plastic or wooden box set up in the backyard — is filled with sand for children to play safely. In gaming, sandbox refers to a game that users can freely enjoy without set rules or limitations. A regulatory sandbox without constraints is good news for struggling enterprises in the face of the government’s anti-business sentiment. Businesses welcome the policy. Many companies have submitted applications to the Ministry of Trade, Industry and Energy for industrial convergence fields, the Ministry of Science and Technology for ICT fields and the Financial Services Commission for financial fields. The Ministry of Trade, Industry and Energy announced the results of its selection Monday.

President Moon Jae-in said on Feb. 8 that with the first approval of the regulatory sandbox, the government would work hard to help new attempts and innovations overflow in the industrial fields. While it is hard to expect huge success, such as with semiconductors, I hope the flowers of innovation bloom from the sand. But bureaucrats need to keep their promise not to meddle with the sandbox.