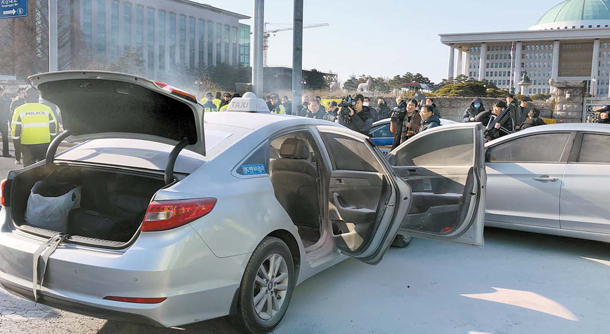 Firefighters work to put out a taxi that was set on fire after it crashed into another car in front of the National Assembly in Yeouido, western Seoul, on Monday. After the crash the driver intentionally set himself on fire and was moved to a hospital in stable condition. [YONHAP]

The third meeting between local taxi industry representatives, government officials, lawmakers and Kakao was halted during discussions on Monday as another taxi driver set his car on fire in front of the National Assembly in Yeouido, western Seoul.

According to local police, the 62-year-old driver surnamed Kim burnt parts of his body including his face. He was immediately moved to a hospital in Seoul for treatment, where he remains in a stable condition. Kim first drove into the National Assembly and crashed into another car. After the collision he set himself on fire, according to Yonhap.

There was no suicide note found at the scene, but Kim had attached leaflets to his car window printed with the phrase “Let’s erase the Kakao app - that’s the only way we can survive.”

In the last three months, two other taxi drivers have died after setting themselves on fire, blaming Kakao’s carpool service.

Meanwhile, inside the National Assembly a joint discussion body aimed at finding an agreement on carpool services was holding its third meeting. It would have been the fourth gathering, but initial attempts at discussions were halted when the taxi representatives boycotted the meeting.

Details of discussions were not disclosed to the public, but Democratic Party Lawmaker Jeon Hyun-heui, who had also led the ruling party’s task force to resolve the carpool issue, told local reporters as she left the room that the two sides had “agreed to continue practical discussions on ways to develop services that combines taxis and platform.”

The exact date of the next meeting has not been decided, she added.

In the previous meeting held on Jan. 25, participants decided to look for ways to develop a platform to improve the service of existing taxis instead of using private vehicles to supplement services. Exactly how the platform would work has not been decided and was to be discussed in the following meetings.

After that meeting, Jeon spoke of plans to devise a sharing platform that would include taxi drivers, but her remark on Monday suggested that no further decisions have been made. Unlike at the previous meeting, she did not hold a press briefing to share details on the talks.

Whatever the proposed service is, it aims to solve the lack of supply of local cabs during peak hours and tackle the criticism that some taxi drivers intentionally avoid short journeys. The public has been complaining about how difficult it is to get a taxi during commuting hours or late at night, while numerous studies have found that Korea has far more taxis than its population requires, especially in regions outside the capital.

Kakao Mobility, which operates transportation-related services, suspended the official launch of a carpool service in December and eventually decided to halt its beta service last month in a move to bring the local taxi industry to the discussion table.

Even after agreeing to join the discussion body, however, the local taxi industry has firmly held onto its position that carpooling should be completely banned. Taxi drivers continued to rally in front of the headquarters of the ruling Democratic Party on Monday, holding signs that urged the government to eradicate carpool services.