LKP reps in hot seat after calling Gwangju a ‘riot’

LKP reps in hot seat after calling Gwangju a ‘riot’ 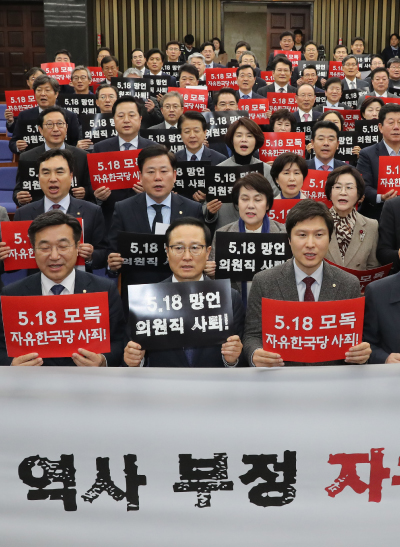 In the National Assembly Monday, lawmakers from the ruling Democratic Party demand the opposition Liberty Korea Party make an apology for describing the May 18 Gwangju democratic uprising as a riot influenced by North Korea. [YONHAP]

The main opposition Liberty Korea Party (LKP) is facing a political storm after some of its lawmakers hosted a public forum at which the May 18 Gwangju democratic uprising in 1980 was described as a riot influenced by North Korea.

The ruling Democratic Party (DP) and three other opposition parties were united Monday in condemning the conservative main opposition party’s view of a turning point in modern Korean history.

They demanded the LKP leadership issue an apology and start disciplinary action to expel three of its lawmakers from the National Assembly.

Rep. Kim Jin-tae and Lee Jong-myeong of the LKP hosted the forum at the National Assembly Friday. The topic was the Gwangju uprising of May 18 to 27, 1980, which called for democracy and an end to the junta of Chun Doo Hwan, who had risen to power through a military coup just five months earlier. Chun crushed the uprising, and while the official death toll was 193, hundreds more were believed to have been killed or injured by armed soldiers.

Other lawmakers from the party, including Rep. Kim Soon-rye, attended the event.

Jee Man-won, a conservative political scientist, gave a presentation that argued the North Korean military was behind the democratization uprising in Gwangju. “May 18 was a guerilla war initiated by 600 North Korean special force troops,” said Jee, a former Army colonel who used to teach at KyungHee University and Inha University and now runs his own institute called System Club.

“The so-called heroes of Gwangju were nothing more than collaborators of the North Korean military, idiotic youngsters and innocent victims,” Jee continued. “Those who led the May 18 movement are now key members of the Kim Jong-un regime in the North,” he said.

During the discussion session, Rep. Kim said he wanted to lay bare the truth about the North Korean military’s intervention. Lee Jong-myeong said, “A riot has been politicized and disguised as a democratization movement.”

Rep. Kim Soon-rye gave a congratulatory speech in which she said, “Pro-North leftists have created a monster group called May 18 victims and are wasting our tax money on them.”

The Kim Young-sam administration re-evaluated the uprising in 1993 as a democratic movement and the government started holding memorial activities. In 1997, the government designated May 18 as an official memorial anniversary by law and an official ceremony has been held every year at the national cemetery in Gwangju.

Following the forum, Jee and the three lawmakers faced a major backlash. Floor leaders of the DP, Bareunmirae Party, Party for Democracy and Peace and Justice Party met Monday morning and demanded the LKP expel the three lawmakers.

They also decided to refer the three lawmakers to the National Assembly’s Special Committee on Ethics today for some kind of disciplinary action.

“Their remarks were a denial of our history, and they were a challenge to the people who built our democracy,” Rep. Hong Young-pyo, floor leader of the DP, said, adding that the four parties will seek to remove the three lawmakers from the National Assembly.

“They committed far more than a simple act of disgrace. They committed violence against democracy,” he said. “The four parties have no disagreement in recommending the strongest punishment - expelling them from the National Assembly.”

In order to expel an incumbent lawmaker from the National Assembly, more than two thirds of the current members of the legislature must agree. As of now, expulsion requires votes from more than 199 out of the current 298 lawmakers, and some LKP lawmakers’ support would be necessary.

Memorial groups for the May 18 Democratization Movement also said Monday they will seek legal measures against Jee and the lawmakers. They said they will ask the state to investigate them for defamation.

The LKP’s interim leadership tried to protect the party from the growing outrage, stressing that the lawmakers’ remarks were not the party’s official position.

“Our vigilance was weakened at some point and remarks that are against the public sentiment were seen,” said Kim Byung-joon, head of an emergency leadership committee, Monday. “It would have been better if they didn’t harm the party during our crisis.”

He, however, said the party wants to decide the fates of the lawmakers.