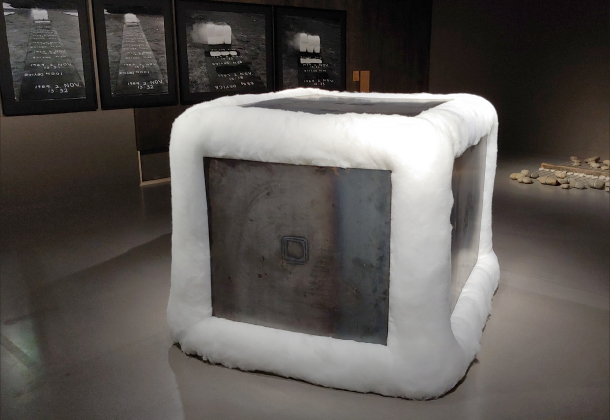 “Awakenings: Art in Society in Asia 1960s-1990s” features 170 works by 100 artists from 13 Asian countries who raised similar questions about society despite their different environments and backgrounds. Some sought to question the boundary of art by using new materials, such as Lee Ufan’s “Relatum” (1969, 1988). [YOON SO-YEON]

The later half of the 20th century was a time of tension and turmoil all over the world, as the devastation of two consecutive world wars continued to reverberate through society. For many Asian countries, the process involved more than just healing war wounds, but fighting inner political, social and cultural wars as well.

Though people living in different social contexts may have agonized over different issues, a deeper look reveals certain similarities which fascinated artists at the time.

A new exhibition at the Museum of Modern and Contemporary Art (MMCA) Gwacheon, Gyeonggi, takes a deeper look into those commonalities found in art from across Asia at the time. “Awakenings: Art in Society in Asia 1960s-1990s” opened on Jan. 31, featuring some 170 works by 100 artists from 13 Asian countries. It looks at how modern art developed across Asia amid the social, political and cultural changes that took place during those often disjointed times.

The exhibition comes after four years of scrupulous research that was jointly conducted by a panel of eight curators from the MMCA, The National Museum of Modern Art Tokyo, National Gallery Singapore and The Japan Foundation Asia Center. 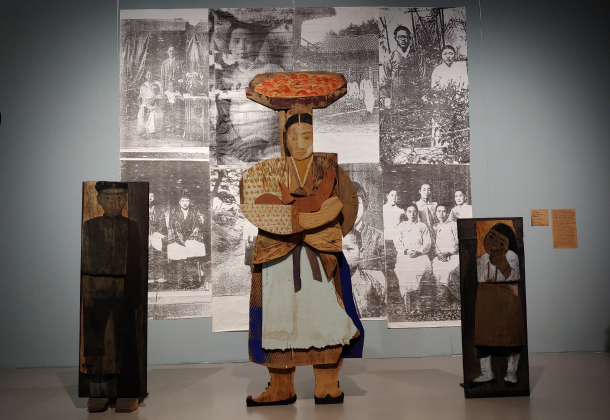 There were artists who endeavored to create new solidarities, such as Yun Suk-nam with “Mother 2 - Daughter and Son” (1992). [YOON SO-YEON]

Curators were careful to study the different social and political contexts of the 13 countries and territories - Korea, Japan, China, Taiwan, Hong Kong, Singapore, Malaysia, Indonesia, the Philippines, Thailand, India, Myanmar and Cambodia. The “Awakenings” exhibition was first held in Japan from October through December last year and will open in Singapore this autumn after the exhibit ends in May in Korea.

“Art exhibitions usually look at Asian art before the 1960s or at certain schools of art, such as Cubism or Realism,” said Bae Myung-ji, the exhibition’s curator at the MMCA. “There hasn’t been enough attention paid [to the 1960s to ’90s] even though it was a very dynamic age, especially in politics.

“The ‘Awakenings’ exhibition focuses on those years perhaps for the first time and looks at how the changes in Asian modern art and politics came from within, not from the outside Western world like it’s said to be.”

To prove that the artistic revolutions came from within, the exhibitions display works not by chronological order, but by the ideas embedded within, or the methodology used to create the works. The introduction helps viewers get a grasp of the whole flow by displaying works that touch on major historical issues that influenced the Asian countries. One such example is the opening work “What Would You Do If These Crackers Were Real Pistols?” (1977, 2018) by F.X. Harsono from Indonesia, a prominent figure in modern art, who sought to fight against the oppression and violence inflicted upon the citizens by the state power.

The exhibition continues onto the first of the main parts, “Questioning Structures.” The name of the section is self-explanatory - to question and challenge conventional norms. The questions reached far and wide; to social structures, materials and the way we think about our bodies. Ultimately, they were aimed at pushing, or even redefining, the boundaries of art.

Kudo Tetsumi’s “Your Idol” (1962), left, was one of many works that criticized the rapid urbanization and capitalism that alienated individuals in the process. Julie Lluch fought for women’s rights through her works like “Thinking Nude” (1988), right. [YOON SO-YEON] 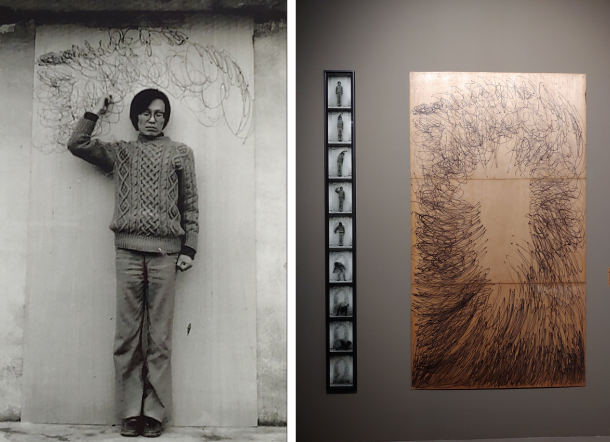 Lee Kun-yong created his work “The Method of Drawing 76-2” (1979), right, by standing with his back against a wooden board, left, and challenged the definition of art as work made using the eyes. [YOON SO-YEON]

The second part, “Artists and the City,” looks at the relationship between people and their community, or the relationship between people and other people, in an age of rapid urbanization and capitalism. Oh Yoon’s “Marketing I: Hell” (1980), Dede Eri Supria’s “Labyrinth” (1987-1988) and Kim Ku-lim’s “The Meaning of 1/24 Second” (1969) are works that point out how individual human beings are left to suffer in a society that changes not for the people living in it, but for the sake of society itself.

The last section, titled “New Solidarities,” looks at the role of art as a means of forming a bond by communicating their common ideas through art. This section includes Choo Keng Kwang’s woodblock print series, Nakamura Hiroshi’s “The Base” (1957), Renato Habulan’s “Fullness of Time” (1982) and Yun Suk-nam’s “Mother 2 - Daughter and Son” (1992).

“Cultures naturally influence each other, and one culture interprets the contents of a different one,” said Bae. “So we cannot say that there were no external stimuli at all, but we emphasize the common ground on which the Asian artists stood. The artists overthrew the conventional system of those times and through this exhibition, we see how the source of that power was existent within Asia.”

The exhibition will be held at the MMCA Gwacheon through May 6. For details, visit www.mmca.go.kr.