Land assessed values rise most in 11 years, Seoul up 14%

Land assessed values rise most in 11 years, Seoul up 14% 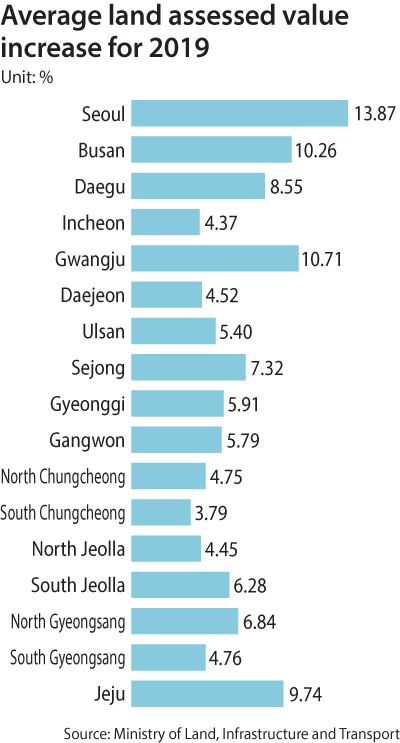 The Nature Republic store in Myeong-dong is the most expensive land in the country, which according to the government is worth twice as much this year as last.

The increase for the Myeong-dong plot, which has been the most expensive land in the country for 16 years running, is extreme, but the figure is rising around the country at the fastest pace in more than a decade.

According to the Ministry of Land, Infrastructure and Transport Tuesday, the government assessed value on land on average grew 9.42 percent, the sharpest increase in 11 years.

The ministry said the increase was largely due to a few properties spiking in value.

Assessed value increased the most in Seoul, with an 13.87-percent rise, twice the 6.89-percent increase last year and the highest increase in 12 years. The last time Seoul land values rose this fast was in 2007, when they went up 15.43 percent.

The government-assessed value is used when calculating the tax on real estate, including the local government property tax and the central government’s comprehensive real estate tax.

The land-assessed value announcement came after the government reported the assessed value for standalone houses on Jan. 24, the average value growing at fastest pace since the current system was developed in 2005.

The government plans to announce the assessed value on apartments and multiunit houses on April 30.

By region, the government assessed value in the greater Seoul area - which includes Seoul, Incheon and Gyeonggi - grew 10.37 percent. The average increase of land values in large cities - Busan, Daejeon, Daegu, Ulsan and Gwangju - rose 8.49 percent, while in other provinces the value was up 5.47 percent.

Among the cities, Seoul topped the rankings, with a 13.87-percent rise. It was followed by Gwangju, at 10.71 percent, Busan, at 10.26 percent, and Jeju, at 9.74 percent. These were the only four cities where the increase was higher than the national average.

The ministry said Seoul land values rose in part due to major projects, such as the Seoul International District and Hyundai Motor’s skyscraper in the Samseong-dong. Gwangju land values were up on an energy industrial complex and Busan for its housing development project.

Within Seoul, the Gangnam government assessed value rose the most, at 23.13 percent, followed by the Jung District, with a 21.93-percent increase, and Yeongdeungpo, at 19.86 percent.

The only areas where valued declined were Gunsan, in North Jeolla, where assessed values fell 1.13 percent, and the Dong District in Ulsan, dipping 0.53 percent. These are areas where major industries have been hit hard. GM Korea last year closed its Gunsan automotive plant, while Ulsan has been impacted by the struggling shipbuilding industry.

The ministry said land values in the central business districts, as well as under major commercial buildings, rose on average 20.05 percent, while other land, 99.6 percent of the total, rose 7.29 percent.

As a result, the ministry said, the higher land assessed value for this year will not have a major impact on tax burdens.

The ministry added in order to be subject to the comprehensive real estate tax, the total assessed value of all land owned by the individual would have to be over 8 billion won. It also said that by law property taxes cannot be increased more than 50 percent.