JYP newbies ITZY shine with stunning debut: Girl group is all about making fans develop crushes on them

JYP newbies ITZY shine with stunning debut: Girl group is all about making fans develop crushes on them 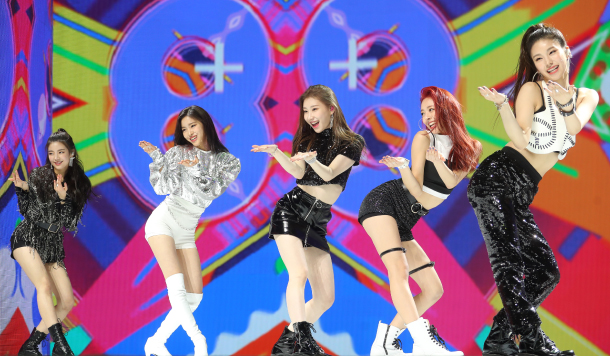 We knew that they were coming, but not quite like this.

JYP Entertainment’s new girl group ITZY made their debut Tuesday, releasing their record “IT’z Different” through online music platforms. The music video for their lead single, “DALLA DALLA,” was released a day earlier at midnight on Sunday. The video was viewed 14 million times in 24 hours, the most ever by a new K-pop group. ITZY is clearly Korea’s new it-girls.

On Tuesday afternoon, ITZY presented itself to the local press for the first time. The five girls -Yeji, Lia, Ryujin, Chaeryeong and Yuna - performed “DALLA DALLA,” a lively and upbeat “fusion groove” song that includes elements of popular genres, such as EDM, dance, hip-hop and house. It’s a song that’s hard to define, but all the more lovable because of that, according to the group.

“‘DALLA DALLA’ is really upbeat,” said Lia. “Because it’s a mixture of so many different genres, anyone will be able to find a part that they like. It may seem like a somewhat unfamiliar genre, but I’m sure that if you hear it once, then you’ll want to hear it again.”

“DALLA DALLA,” which means “it’s different” in Korean, shows off the groups’ confidence as proud young girls who are different from everyone else.

Their music video and music reminded many viewers of K-pop girl groups such as Blackpink or 4minute, who also went for powerful feminine vibes, but they’re ready to stand out, according to the members. They plan to make fans develop crushes on them with their teenage charm, according to leader Yeji.

“Other girl groups have been loved in the past for their charms, and I think it’s an honor that we get to be mentioned along with them. But just as they all have their own colors, we would like to create our own ‘teen crush’ genre and show our fans something that’s like no other,” said Yeji.

Chaeryeong added, “We would like people to say, ‘Wow, they’re so ITZY.’ I hope that the name ITZY becomes a name in itself that’s enough to explain who we are.”

Although Tuesday marked their official debut, four of the girls have previous experience on TV, explaining the immense popularity and attention directed toward the group even before their debut. Yeji was featured on SBS’ “The Show,” Ryujin had been voted as No. 1 on JTBC’s “Mixnine,” Yuna was a part of Mnet’s “Stray Kids” and Chaeryeong already established her fandom through her appearance on Mnet’s audition program “Sixteen” and SBS’s “K-Pop Star.” Chaeryeong’s sister, Chaeyeon, also debuted as a part of IZ*ONE, a project girl group that launched through Mnet’s audition program “Produce 48” last year.

“I think I have matured from then, and my [dancing] skills have gotten better from then as well,” said Chaeryeong.

“We are so grateful for all the attention that we got, and we will be doing our best to fulfill all those expectations,“ said member Ryujin.

Park Jin-young, the head of JYP, congratulated ITZY for its debut through an Instagram post, writing, “Congratulations girls! So glad to see that your sweat and tears paid off. But please know that this was possible because of all the artists in JYP and K-pop that paved the way before you. This is a great start so keep marching!”

To ensure they don’t let their fans and seniors down, ITZY is ready to give all it’s got.

“Our slogan is ‘all in us,’ meaning that we have everything with us that you’d like to see,” said Yeji. “All the five members are different and unique, but at the same time have a charming teen crush that we show as teenagers.”

Ryujin added, “We would like to be the first ITZY, not the second anything.”

Their record was released through online music platforms on 6 p.m., including their lead track “DALLA DALLA” and another song titled “WANT IT?”, in which the members showed off their powerful rap skills and energy.