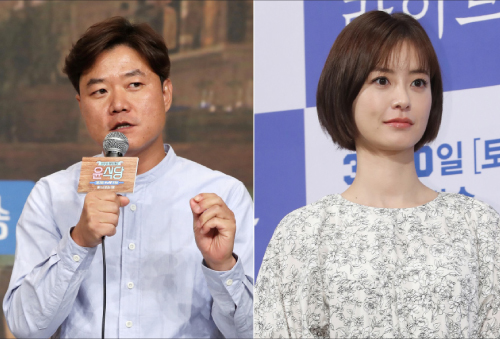 Spreading rumors is anything but harmless fun in Korea.

On Tuesday, police announced they caught three people who created a rumor about CJ ENM’s producer Na Yeong-seok, left, and actor Jung Yu-mi being in an adulterous relationship; six people who posted the rumor online; and a person who wrote insulting comments on related news on the internet.

The three rumor creators, including a 30-year-old surnamed Lee, have been booked on charges of defamation by creating and circulating the rumor.

According to the police, the rumor went viral after they were spread via the Kakao Talk chatting app last Oct. 17. Two days later, Na and Jung filed for defamation and libel against the rumor, saying the assertion was false.

The police found during an investigation that there were two main versions of the rumor that spread.

Jeong first created a fake screen grab of a Kakao Talk conversation based on gossip from screenwriters at TV broadcasting stations and sent it to their acquaintances. Lee, who later received the file, reworked the contents into a text and sent it to coworkers.

Another version was created by 30-year-old Lee, who worked as a screenwriter at a broadcasting station.

The trio “had no idea that it would get so big,” according to the police.

The police will recommend prosecution of the 10 people but one is not likely to be indicted after the victims’ lawyers dropped a complaint.

“When you’re circulating content that defames others, you can get punished for spreading it [to other people] even if you’re not the initial creator,” the police warned.