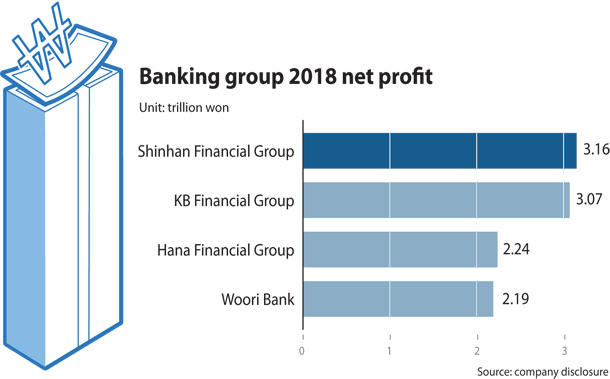 On Tuesday, Shinhan said it posted an all-time high net profit last year of 3.16 trillion won ($2.8 billion), up 8.2 percent from the previous year.

The group that controls flagship Shinhan Bank, Shinhan Card and Shinhan Investment attributed the growth to increased profit from its overseas business and non-banking units.

“Shinhan Bank’s profit from overseas business grew 30 percent for two consecutive years, expanding its share to 14 percent of the bank’s entire profit,” the group said in a statement.

The pillar of the unit’s growth strategy was reducing its reliance on banking, as the segment increasingly faces market saturation and limited demand in Korea.

In line with this direction, the group’s board decided to raise 700 billion won in capital for Shinhan Investment, a brokerage affiliate, via the issue of new shares.

The move is intended to let the securities unit run a more diverse range of investment-related businesses, as the government set specific areas of services depending on the size of a brokerage’s capital.

Shinhan made 513.3 billion won in net profit between October and September while KB posted 200.1 billion won. KB’s yearly net profit stood at 3.07 billion won, down 7.3 percent from a year ago.

“2018’s profit was affected by increasing costs including benefits for early retirement, growing fluctuations in the stock markets and operating losses in the non-life insurance sector,” the group said in a statement. KB Financial Group shares a similar strategy as Shinhan as it seeks to beef up its non-banking financial affiliates.

The group, at the top of KB Kookmin Bank, KB Securities and KB Kookmin Card, participated in a preliminary bid to acquire Lotte Capital, a consumer finance affiliate of Lotte Group, according to multiple media reports Tuesday. MBK Partners, the country’s leading private equity firm, also vied for a controlling stake in Lotte Capital, though Shinhan pulled out from the race despite market speculation that it would pursue Lotte Capital. Woori Bank also posted a record-high profit, with its annual net profit topping the 2-trillion-won mark for the first time.