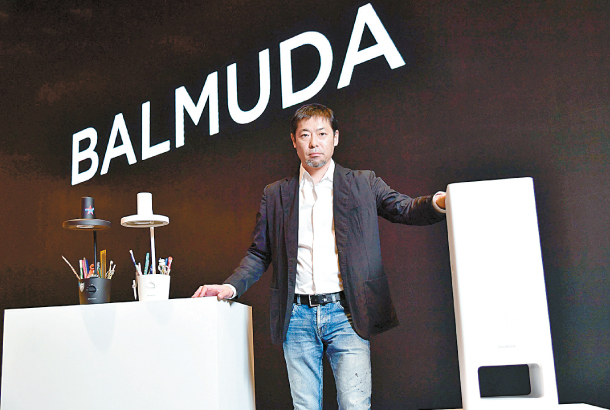 Balmuda, a Japanese high-end home appliance maker, is introducing a new air purifier in Korea today ahead of the rollout in Japan, where the launch date has not been set.

Balmuda CEO Gen Terao emphasized the importance of the Korean market during the company’s first press conference in Korea Tuesday as he unveiled The Pure air purifiers.

“We chose to unveil our air purifiers in Korea in light of the fine-dust problem and Balmuda’s growing brand awareness here,” Terao said at the conference in Yongsan District, central Seoul.

Several new features make it an upgrade from the AirEngine, the company’s older 2013 model.

One of the key innovations is that The Pure allows users to see how much dust the machine sucks in. The purifier has a rectangular hole cut out in the bottom installed with lighting, making it easy for users to see the dust and particles that go up into the filter above the hole.

The Pure’s HEPA filters can trap 99.97 percent of particles as small as 0.3 microns and eliminate odors. The machine releases up to 7,000 liters (1,850 gallons) of cleaned air per minute.

The Pure will be available at department stores and online and offline electronic retailers from today. They are priced at 749,000 won ($666).

“When I saw this [Xiaomi] product, I wondered when we had built it because it had the same size, silhouette and structure as the AirEngine,” Terao said. “But the fact that others are copying us is proof that our products are good.”

Balmuda, founded in 2003, posted over 10 billion yen ($90 million) in annual sales last year. The company currently generates around 30 percent of its total revenue in Korea.