Traded on the Japanese stock market, Nexon reported 98.4 billion yen ($889.6 million) in operating profit for 2018, a 9-percent increase year on year. This is equivalent to 980.6 billion won, based on the average won-yen exchange rate for the year’s fourth quarter. 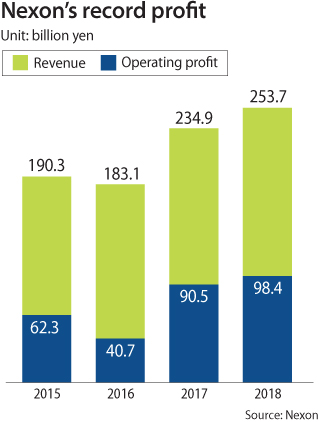 The company’s annual sales were 253.7 billion yen, an 8-percent rise from 2017. Net profit nearly doubled to 107.7 billion yen during the same period. These are records not only for Nexon, but also in the local gaming industry. Annual earnings in both the PC and mobile gaming sectors broke records last year.

“We continued to show the strength of our flagship franchises, including MapleStory, as well as Dungeon&Fighter, which achieved another year of double-digit growth in its 10th year of operation in China,” said Owen Mahoney, Nexon’s CEO and President.

Nexon particularly showed advancements in its overseas business, which grew around 17 percent year on year. In China, which generates more than half of Nexon’s revenue, the success of the PC game Dungeon&Fighter pushed growth in the market by 15 percent on year. This was the third year in a row that the game has generated double digit sales in China.

Mobile game Choices by affiliate Pixelberry Studios, MapleStory’s mobile version and Darkness Rises pushed revenue growth in the United States up 77 percent year on year. The region accounts for 7 percent of Nexon’s revenue. In Korea, the company’s second biggest market, 15-year-old MapleStory made a comeback, generating 67 percent more revenue than it did the previous year.

The game publisher has not officially confirmed Kim’s plans, but Netmarble, Korea’s third largest game company by market cap, publicly announced earlier this month that it will bid to acquire Nexon. Potential buyers are to submit papers to register for the bid by Feb. 21, according to local reports citing investment banking sources.

NCSoft also reached an annual record in operating profits, which grew 5 percent year on year to 614.9 billion won ($547 million). Revenue growth was slower, down 2 percent on year at 1.7 trillion won. The increase was largely due to the success of mobile game Lineage M in Taiwan, where it released in late December 2017.

During its conference call, NCSoft implied that the release of Lineage 2M, a highly anticipated release for the company, may be delayed from its planned release in second quarter to the third quarter. It also commented on rumors it would bid for Nexon, saying it was uninterested.

Netmarble’s annual results are set to be announced today. The general assessment among local analysts is that the company is likely to see year-on-year declines. After setting records in 2017, its major release, Blade&Soul Revolution, launched last December, has yet to live up to expectations.