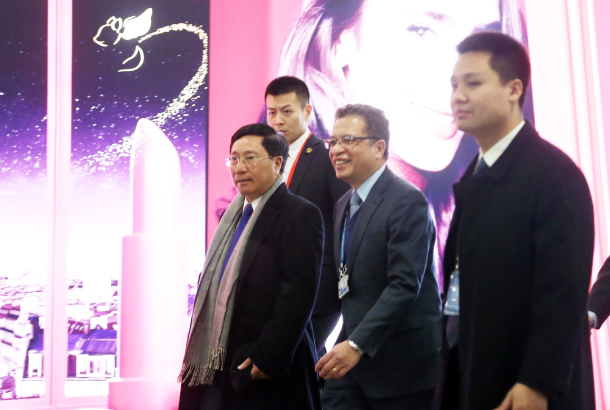 North Korean leader Kim Jong-un is planning to take a state visit to Vietnam around Feb. 25, two days ahead of his second summit with U.S. President Donald Trump, according to a South Korean intelligence source.

During Kim’s first state visit to Vietnam, he could meet Prime Minister Nguyen Xuan Phuc, as Nguyen Phu Trong, Vietnam’s leader and general secretary of the ruling Communist Party, will probably be out of the country, the souce exclusively told the JoongAng Ilbo Monday on condition of anonymity.

Before meeting Trump, Kim met Singapore’s prime minister and toured tourist attractions, including Gardens by the Bay, a waterfront garden, and Marina Bay Sands, the iconic hotel that features a boat-shaped “sky park” perched atop three 55-story towers. North Korea’s official media at the time described the two-hour jaunt as an opportunity for Kim to learn about Singapore’s social and economic development.

Kim will probably re-enact that economic sightseeing in Vietnam this month, said the intelligence source, by visiting Haiphong, a major industrial and commercial hub in the northern part of the country, along with the limestone islands of the Ha Long Bay. Ho Chi Minh City, the largest city in Vietnam in terms of population, is also being considered, but the source said it may not make it onto Kim’s itinerary due to its distance from Hanoi, about 700 miles.

Kim Hyun-wook, a professor at the Korea National Diplomatic Academy, suggested Kim’s touring of his communist ally could be a propaganda boon for North Korean media back home even if Kim fails to get sanctions relief from the United States. State media can highlight Kim’s diplomacy with Vietnam and promote Kim as an “international leader of socialist countries” instead.

As cash-strapped Pyongyang worries about protecting Kim in a foreign state, a South Korean diplomatic source pointed out that having the leader travel to Vietnam on a state visit could lift part of that financial burden because Vietnam would provide security support and cover lodgings.

The Foreign Ministry did not mention that a state visit by Kim was forthcoming.

Kim’s grandfather, founding leader Kim Il Sung, visited Vietnam on a state visit in 1958 and 1964 to hold summits with Ho Chi Minh, the founder and first leader of Vietnam’s Communist Party. If Kim Jong-un does a state visit to Vietnam, it will be the first for a Pyongyang leader in 55 years.