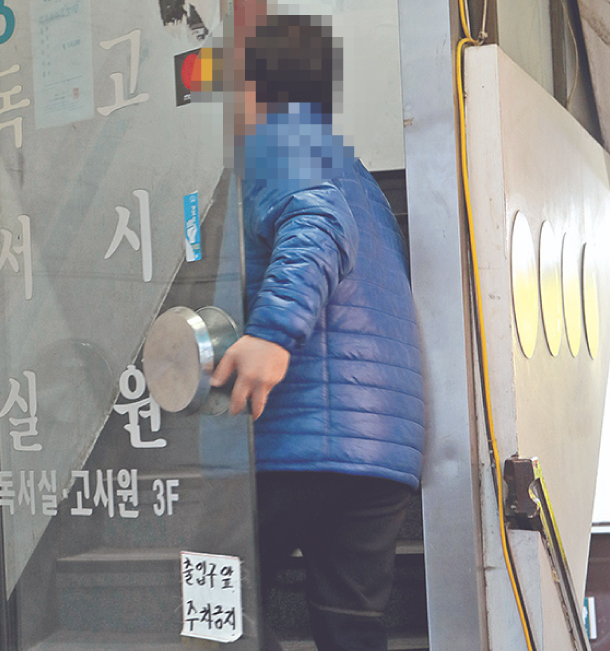 Yoon Gwi-sun, a recipient of the basic living subsidy, enters his one-room apartment, where he has been living for four years, on Jan. 17. [CHOI JEONG-DONG]

Yoon Gwi-sun, 49, lives alone in a shabby room near Ewha Womans University Station in western Seoul. Since 2016, he has lived off the government’s basic living subsidy. He spends only about 12,000 won ($10) per day.

Yoon became a recipient of the basic living subsidy at a relatively young age after developing severe back pain while working in construction.

His room is only 3.3 square meters (35 square feet), with a small TV and a table. It leaves barely enough room for a tiny bed. Though Yoon can no longer work in construction, he has to work as a clean community self-help center an hour away from Monday to Friday as a condition of receiving the government subsidy.

If Yoon did not have the ability to work, he would be classified as a standard recipient of basic living subsidy, since he has no particular savings close to zero income. Instead, he is categorized as a “conditional” recipient, as his back pain does not qualify as a disability, according to the government standards.

“I’m ashamed to call myself one of the recipients of the basic living subsidy. I consider myself still young,” Yoon said. “It’s embarrassing to receive money from the government at such a young age, when there are so many others who are much older and poorer who are suffering.”

Even though Yoon considers himself to be full of potential, his back pain does not allow him to have a decent job, since it is excruciating for him to stand for just one or two hours. 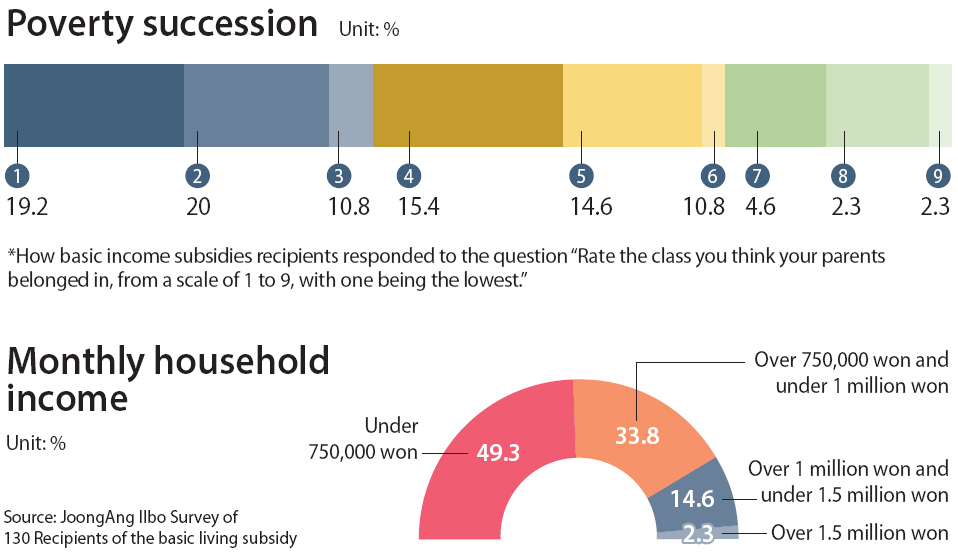 “I would have loved to get surgery or physical therapy, but when I heard the price for an MRI, which was about 650,000 won, I gave up. It’s impossible considering how much I receive per month,” Yoon said.

Yoon receives approximately 700,000 won per month for his subsidy. He lives off 500,000 won after paying for his rent and electricity bills.

Yoon’s family had long been poor. His parents, who did not receive basic education, died without leaving him an inheritance. His mother, a street vendor, died of an undiagnosed disease when Yoon was only seven years old. His father lived without a job for the rest of his life until his death.

His five other siblings were left penniless, and Yoon only received an elementary school education. It was Yoon’s oldest sister that raised the remaining family members. After taking a school qualification exam and earning a high school diploma, Yoon started working at construction sites and auto repair shops.

With the money he earned, he opened a small restaurant in Suwon in 2005, only to shut it down after a year after it wasn’t successful. From then on, he didn’t have any choice but to sleep in cheap one-room accommodations, often skipping meals. His siblings face similar conditions.

The number of people like Yoon suffering from long-term poverty shows no sign of decreasing, due to inherited poverty and the inefficiency of Korea’s universal welfare system.

According to a poverty survey conducted by the JoongAng Ilbo, among the 130 recipients of basic living subsidy working community self-help center located in Seoul, 65 percent said that their parents have “always been poor.”

The results were similar to the same poverty survey the JoongAng Ilbo conducted in 2003, when 60 percent of the recipients said their parents were poor, adding that their grandparents have always been poor as well.

“It’s getting harder to escape poverty because of the unfair ‘universal’ welfare policy,” said 43-year-old Jeon Hyeon-yong, also a recipient of basic living subsidy, whose family suffered from poverty for three generations. “In other words, there is no chance for people like us to make a fortune or get a decent job. Not in this social atmosphere. I have no hope for my future.”

His outlook reflects how the current universal welfare policies operate.

“The governments’ encouragement and expansion of the universal welfare system only increased benefits for the middle class, instead of helping and giving more benefits to people that are suffering from extreme poverty,” said Oh Geon-ho, chairman of the nonprofit organization My Welfare State.

“Even though the amount of welfare benefits increased since 2010, when people initially voiced the need for the expansion of universal welfare, it didn’t help the poor lift themselves up from poverty,” Oh said. “The initiative of the welfare policy was to give even benefits to everyone, regardless of their income.”

“So naturally, the middle class obviously gets all the advantages from the so-called ‘universal welfare,’ when it’s actually the poor that needs to get more benefits,” Oh said.

He then emphasized the need for the government to focus on improving the welfare policy to one based on helping the poor acquire sustainable jobs.

“The only way to do so is to provide an opportunity for these people to have a lifelong learning, and give more welfare benefits to the vulnerable and disadvantaged at the bottom of the financial pyramid,” Oh said.

Meanwhile, though the policy for the poor “needs to get better,” according to Oh, there are still people like Yoon who haven’t given up on overcoming their poverty.

“I’ve started saving 100,000 won into a housing purchase account every month since last fall. I don’t want to be a [welfare] recipient anymore,” Yoon said. “Even if I live only 10 years, I might as well make the most of it and live without shame.”