South Korea’s lone International Olympic Committee (IOC) member, Ryu Seung-min, said Wednesday that he believes fairness and the proper process should be considered important when his country begins talks with North Korea on fielding joint teams at the 2020 Tokyo Olympics. 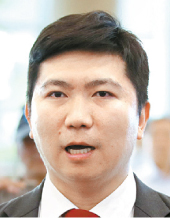 Ryu, a member of the IOC Athletes’ Commission, will fly to the IOC headquarters in Lausanne, Switzerland, later Wednesday with South Korean Sports Minister Do Jong-hwan, and Korean Sport & Olympic Committee President Lee Kee-heung, for a meeting with North Korea and IOC officials. They will discuss organization of unified Korean teams at the 2020 Tokyo Olympics and a joint Korean bid for the 2032 Summer Games.

“The tripartite meeting will be an opportunity for each party to express its ideas, instead of producing an immediate outcome,” Ryu said. “I hope discussions on unified Korean teams can be carried out under fair rules of sports.”

In Lausanne, South and North Korea are expected to exchange their opinions on sports disciplines they wish to compete in together at Tokyo 2020. But Ryu said that to form joint teams, the two sides need to overcome many hurdles, including earning agreements from sports’ international federations and other Olympic participating nations.

“Since other athletes and teams need to go through fierce qualifying stages to earn their spots at the Olympics, we need to have discussions on this issue,” he said. “We’ll be trying to find solutions under existing rules in sports.”

Table tennis is one sport in which the Koreas are looking to join forces at Tokyo 2020. Seoul’s Korea Table Tennis Association already said it wants to have a unified team in the mixed doubles event.

Despite there being a precedent, Ryu said taking proper procedures is still important.

“Table tennis is a sport where the Koreas have a history of fielding unified teams, but we still have to deal with quota issues,” he said. “I think the two Koreas also should be prepared to compete as one team. Before the Olympics, they should train together and expand exchanges to deliver good performances.”