Japanese-Korean judoka rises through the ranks

Japanese-Korean judoka rises through the ranks

Judoka Kim Ji-su has quickly risen through the ranks of Korean women’s judo. 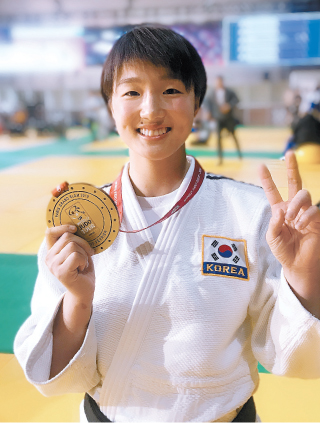 During the 2019 Paris Grand Slam on Sunday, Kim won bronze in women’s 57 kilograms, defeating Rafaela Silva of Brazil. By winning the match, Kim won her second straight bronze at the event.

“I was worried at first because I wasn’t sure if I could do it,” Kim said. “But I started to gain confidence as I played in more games. I was disappointed to miss gold but I played thinking that I have to win bronze. I’m very happy to win [bronze,] but I won’t be satisfied about this. I’ll work harder so I can win gold next time.”

Although it was a disappointment for Kim to walk away with a bronze medal, women’s judo team head coach Bae Sang-il was quick to point out that beating Silva, the 2016 Rio Olympics gold medalist, was not a small achievement.

“Ji-su’s strength is that she doesn’t get scared, no matter how tough the opponent is,” Bae said. “When we found out Silva was going to be her opponent in the bronze medal game, she said she wanted to win. Also, since she just graduated high school, she has unlimited potential.”

As the Japanese national team is notoriously difficult to qualify for, Kim chose to return to her roots and compete in Korea.

Although Kim was already an impressive judoka, training under head coach Bae helped her develop further. Rather than focusing on skills, Bae focused on Kim’s physical strength so she can start practicing shoulder throws, a favorite move of Korean judokas.

“At first she had a hard time adjusting to the intense training schedule with the Korean national team judokas, but now she has fully adjusted to it,” Bae said.

Now, Kim’s dream is to compete at the 2020 Tokyo Olympics. At the Games, Kim is likely to compete against the Japanese judokas she trained with when she was young.

Although the Korean women’s judo team didn’t do as well as the men’s team at the most recent Olympics, this year they are receiving a lot of attention as Kwon You-jeong is currently the best in the 57-kilogram division, the same division that Kim competes in. Since it’s rare to have two good Korean judokas in the same weight division, the team has receiving a lot more support from the Korea Judo Association.

“It’s rare to see a rivalry between two female judokas in the same weight division [in Korea,]” Bae said. “For Kim and Kwon, this is a good thing. If they continue to grow like this, they’ll be competing against each other for the Olympic spot.”

Kim isn’t the first Japanese-Korean judoka to make a name for herself. Male judoka An Chang-rim was born in Japan and scouted by the Japanese team, but chose to represent Korea. He won gold at the 2018 Baku World Championship. Yoshihiro Akiyama, also known as Choo Sung-hoon, won gold for Korea at the 2001 Asian Judo Championships. He is now better known as a UFC fighter.