New jobs figure for Jan. is lowest in five months

New jobs figure for Jan. is lowest in five months 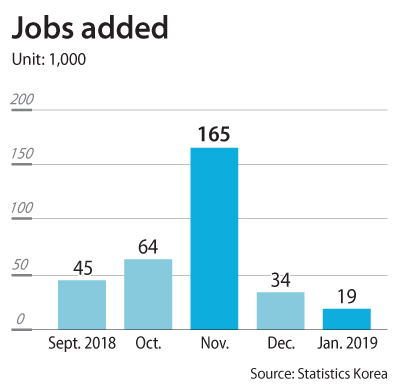 The number of new jobs created in January was the lowest in five months while the number of individuals without jobs reached the highest level since March 2018.

In response, the government said Wednesday it will create 2,000 additional jobs in the public sector this year on top of the 23,000 it was already planning.

“In order to improve the difficult job conditions, the government will exert all efforts, including [adding jobs in] the public sector,” Finance Minister Hong Nam-ki said at a meeting of economics-related ministries Wednesday. “Public institutions will take the lead in expanding jobs.”

Hong said the government will increase jobs in the area of public safety by next month.

The minister said he felt “responsible” for the low growth in new jobs, which only managed growth in the single digits for two consecutive months.

On Wednesday, Statistics Korea released a report that showed 19,000 jobs were added last month compared to the previous years. This was the lowest since August when only 3,000 new jobs were added.

Since the minimum wage was raised in 2018 as part of the Moon Jae-in government’s income-led economic growth policy, job figures have been dwindling.

It was the lowest annual increase in nearly a decade. In 2009, in the wake of the global economic meltdown, 87,000 jobs were lost compared to the previous year.

The government earlier this year announced plans of raising the number of new jobs for all of 2019 to 150,000.

In January, the unemployment rate rose to 4.5 percent, up 0.8 percentage points compared to a year ago.

Last month, the number of people without jobs amounted to 1.22 million, the largest number since March last year, when there were 1.25 million.

The government said the primary reason for the disappointing jobs report was a slump in manufacturing, especially with the recent downturn in the semiconductor industry.

The manufacturing industry has been losing jobs for nine consecutive months since April 2018. January’s loss was the largest monthly loss since January 2017.

The government has been trying to cool down the real estate market by making it harder to borrow, which has led to less construction.

The wholesale, retail and restaurant industries, all sensitive to the effects of a higher minimum wage, continued to shrink.

Last month 108,000 jobs were lost in the three sectors combined, a decrease of 1.8 percent.

The statistics agency, however, said the jobs situation in those areas has improved slightly as Chinese tourists return to Korea.

The number of Chinese tourists visiting Korea in the fourth quarter numbered 432,000, a slight decline from the third quarter’s 441,000, but an improvement from 2017 and the first two quarters of 2018 when the number of monthly visitors fell to around 300,000.

Some 12,000 owner-operated businesses closed in January, the report said.

Areas that saw jobs added were health and social welfare, agriculture and fisheries, as well as the IT sector.

“The government will put improvement of the jobs situation as its top priority and, by employing all available policies, will work to achieve our goal of creating 150,000 jobs [by the end of the year,]” Finance Minister Hong said.

“We believe [the jobs lost in manufacturing] are a combination of economic structural problem and lack of investments [by private companies,]” Hong said.

He said the Gwangju job model - in which a local government and private company form a joint venture to create new jobs - will help.

The government is planning to announce two more similar projects based on the Hyundai Motor-Gwangju model within this month.

He also said the so-called regulatory sandbox initiative, in which regulations are relaxed for selected projects, will help raise more jobs.

However, in regards to the possibility of resorting to a supplementary budget, Hong said it is not being considered at the moment.

“We have to wait and see in regards to a supplementary budget,” Hong said. “Currently we are focused more on early execution of our [current] budgets in executing policies that were announced earlier, including revitalizing the private sector.”