In memory of Cardinal Kim

In memory of Cardinal Kim 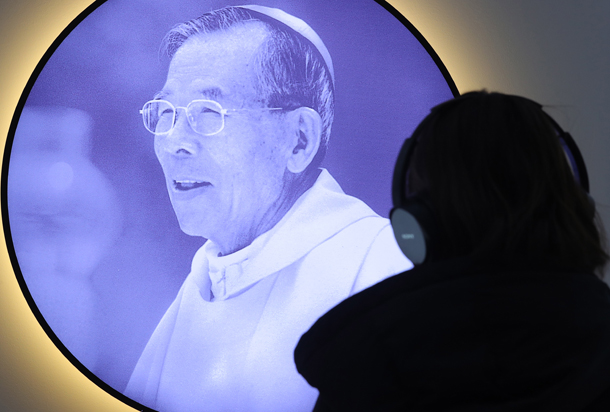 A visitor listens to the recorded voice of late Cardinal Stephen Kim Sou-hwan at a photo exhibition in Myeongdong Cathedral in Seoul. The exhibition was held in commemoration of the 10th anniversary of his death on February 16. [NEWS1]

“Write your thoughts as a subject of the empire about the emperor’s order to young students in the Joseon Peninsula.” An 18-year-old student read the question and wrote two sentences. “I am not a subject of the empire. Therefore, I have no thoughts on it.” This was at Seoul’s Dongseong School in 1940. The boy later became a Catholic priest: He is the late Cardinal Stephen Kim Sou-hwan, who passed away 10 years ago on Feb. 16.

After he became a priest and studied in Germany, he was influenced by the second Vatican Council’s spirit of “social participation of the Church.” That is why he supported the democratization movement in the 1970s and ’80s. In late 1971, military general-turned-president Park Chung Hee attempted to legislate the Act on Special Measures for the National Security to grant himself emergency authority. In a Christmas mass broadcast live nationwide on KBS, Cardinal Kim went off-script. “I want to ask the government and ruling party lawmakers in the name of the conscience of most citizens. Do you really have a conscious conviction that legislation of the Act on Special Measures for the National Security is necessary and indispensable?”

President Park was startled while he was watching the television and ordered the live broadcast to be cut. When riot police tried to enter Myeongdong Cathedral to capture student activists in June 1987, he famously said, “You will have to trample me first.”

Cardinal Kim sent many messages to the world, and many of them are still relevant today. “You need to contemplate why people are worried about reform. You must act wisely and promptly. You should not be confident that the majority of the people are supporting you and everything is going well. Many people are backing reform but are wary at the same time. They are concerned that the president or his staff are too confident and make important decisions unilaterally. The people are growing anxious,” he said during a lecture to the Korea Institute of Development in September 1993.

Cardinal Kim once said, “No one thing is absolute and can be absolute. We need to respect each other on every issue. Rather than presenting our own ideas to others, we need to listen to others sufficiently.”

At the 2005 Proposals of Hopes, with 131 figures in various fields, Cardinal Kim suggested the idea of unifying a divided society of the conservatives and liberals and creating jobs for the unemployed. How would it be if there were an elder like him today to share such words? I find his absence to be particularly large.