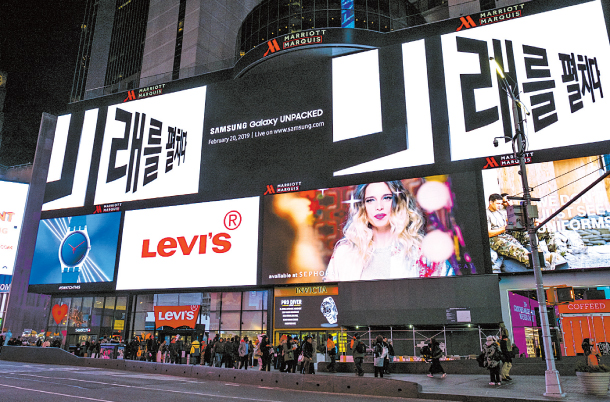 An advertising banner in Korean, which reads “Unfolding the future,” is displayed in Times Square, New York.

The ad by Samsung Electronics could be seen at other major landmarks elsewhere in the world.

It could was also displayed at the Place de La Concorde in Paris, the Plaza del Callao in Madrid, Spain and the Duomo di Milano in Rome.

It was also displayed at Robinsons The Heeren in Singapore.

The global advertising campaign was rolled out ahead of the Galaxy Unpacked 2019 event that will take place on Feb. 20 in San Francisco.

According to the company, the ad was in the Korean language to express Samsung’s identity as a leading Korean brand in the mobile communication industry.

This year is the 10th anniversary of Samsung’s first Galaxy launch. [SAMSUNG ELECTRONICS]