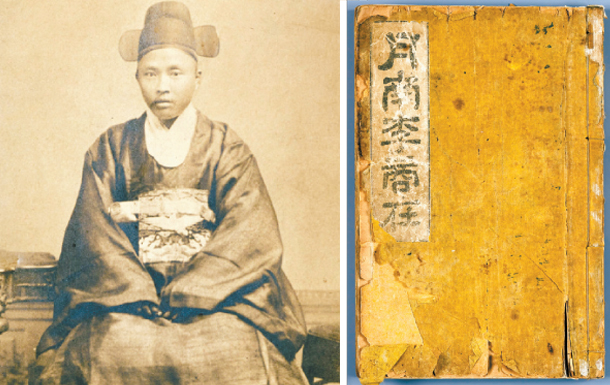 Documents, right, collected by Korean Secretary Lee Sang-jae (1850-1927), to the United States, left, show how Korea was setting up its diplomatic relations with the U.S. [CULTURAL HERITAGE ADMINISTRATION of KOREA]

More details about how Korea established stronger diplomatic relations with the United States are now available for further study thanks to a recent donation to the Cultural Heritage Administration (CHA).

Diplomatic documents delivered from U.S. President Chester Arthur in 1883 to King Gojong, as well as documents regarding possible projects the two countries could work on together, were found. A draft of the “Cheoldo Yakjang,” which roughly means a contract to build a railway, was found as well. The rights to construct the Gyeongin Line, a railway between Seoul and Incheon, was thought to have been first issued to American J. R. Morse in 1896, and then handed over to Japan in 1897. Japan finished construction in 1899. With the new documents, experts can now research how the Joseon Dynasty (1392-1910) was consulting the United States on railway construction in 1888.

“We can speculate Joseon was trying to get a third-party, the United States, to give more attention to the peninsula, in a way to protect itself from the [power game] with neighboring China and Japan,” said an official with CHA at the press briefing. “If there was an [economic investment] made, the officials might have thought that there was a higher chance of the United States trying to help Korea in case it was attacked.”

Documents left by Lee Sang-jae (1850-1927), an activist for Korea’s Independence from Japanese Rule, from when he was dispatched in 1888 to open the Korean Legation with Park Chung-yang, the first Korean minister to the United States, were donated by Lee’s eldest grandson. The letters include his observations, which can be used to understand how the Korean Legation operated in the late 1880s.