Another game. Another goal.

Another game. Another goal. 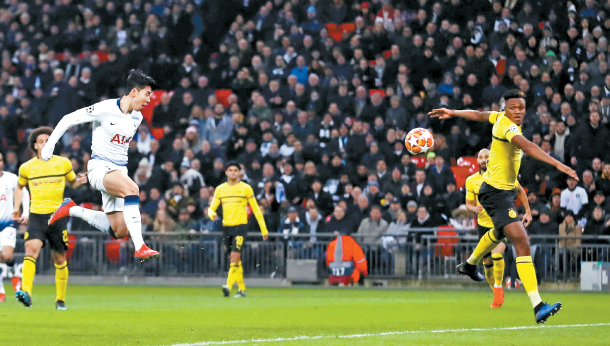 Son Heung-min of Tottenham Hotspur scores a goal against Borussia Dortmund during the first leg of the round of 16 at UEFA Champions League at Wembley Stadium Wednesday. [REUTERS/YONHAP]

Son Heung-min of Tottenham Hotspur continued his unstoppable form on Wednesday, scoring his 11th goal in 12 games against Borussia Dortmund during the first leg of the UEFA Championship League round of 16 at Wembley Stadium.

Spurs got off to a slow start, playing a scoreless first half. It was Son who changed things up at the top of the second half, scoring a volley in the 47th minute to give Spurs the lead.

The London club continued the momentum with Jan Vertonghen scoring another in the 83rd minute and Fernando Llorente following up with a third goal only three minutes later.

“We won it, [the] first game,” Son told BT Sports in a post-match interview. “Of course it’s not finished. We have to focus [on the] second game as well.”

Since UEFA Champions League round of 16 matches are played over two legs, Spurs will face the German team once more March 5 at Westfalenstadion in Dortmund, Germany.

“The first half was tough, was an even game,” head coach Mauricio Pochettino said to Spurs TV after the match. “But after Sonny scored the team started to feel more free and we started to play in a very good way.”

By scoring a goal against Dortmund, Son has continued a hot streak against the Bundesliga club that has continued since his own days in the German league.

Throughout Son’s career, he has scored nine goals in 11 appearances against Dortmund.

Son is now on a four-game goal scoring streak with Spurs. Throughout the 2018-19 season, Son has now scored 16 goals - 11 league matches and five cup matches.

Son himself was quick to credit his most recent goal to Vertonghen’s cross, rather than his own fancy footwork.

“The timing was very important but the cross was just unreal and unbelievable,” Son told BT Sports. “They just come in my feet and I don’t have to do many things. I just touched the ball and luckily inside.”

Son’s success has made headlines both in Korea and Europe, not only because of the number of goals, but also because the achievement is made all the more impressive because of the busy season he has had.

Son had to leave Spurs mid-season to join the Korean national team in the Asian Cup. He arrived in the United Arab Emirates (UAE) just in time for Korea’s final group match against China and was given no chance to acclimatize as the Taeguk Warriors were missing key players due to injuries.

Son played in all three matches after he joined the team - against China, Bahrain and Qatar - at the Asian Cup.

Although Son mentioned he was tired, he successfully led Korea to a 2-0 victory against China. However, starting in the knockout stages, Son’s performance seemed to lag and he appeared to be struggling.

Korea crashed out early after a disappointing 1-0 loss to Qatar and Son immediately returned to Spurs, also struggling with key players missing, and was on the pitch within a few days.

Son has continuously appeared for Spurs since his return, attempting to make up for the absence of key players, such as Harry Kane and Dele Alli.

As the two players are expected to return by the time Spurs next face Dortmund, the second leg ought to prove easier than the first.

Son has also proved crucial in helping Spurs maintain their spot near the top of the English Premier League. As of Thursday, Spurs are ranked third with 20 wins and six losses, totaling 60 points. They are five points behind the leader Manchester City and runner-up Liverpool.

Spurs’ next match of the season will be a Premier League match against Burnley FC at Turf Moor Friday.

“Next time Son scores, I will go to the dressing-room, shower and wait for the game [to end],” Pochettino was quoted as saying on the Guardian.

“Sonny was fantastic again. He translates good energy and his performance in every game is improving.”