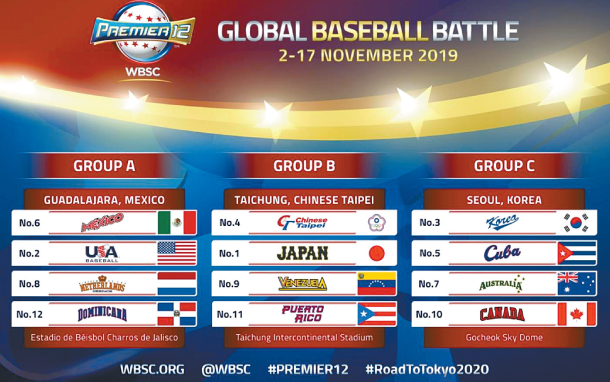 The World Baseball Softball Confederation (WBSC) tournament, the first qualifying event for the 2020 Tokyo Olympics, will run from Nov. 2-17, though specific match schedules for the preliminary round haven’t been announced.

There are three groups of four teams in total, and the top two teams from each group will advance to the six-team Super Round, to be played at Zozo Marine Stadium in Chiba and Tokyo Dome in Tokyo, both in Japan.

Group A teams are the United States (No. 2), Mexico (No. 6), the Netherlands (No. 8) and the Dominican Republic (No. 12). Their games will be played in Guadalajara, Mexico.

“We got a better draw than I’d expected, but we’ll try to break down every opponent closely and not underestimate anyone,” Kim said.

Baseball will return to the Olympics in Tokyo next year. Korea claimed the last Olympic baseball gold medal in Beijing in 2008, with Kim Kyung-moon as the team’s manager. Korea brought him back to the post last month.

Baseball at Tokyo 2020 will feature six nations. The WBSC said the top finisher from the Americas and the top country from the Asia/Oceania region, excluding Olympic host Japan, will earn direct entries into Tokyo 2020.

This means Korea will have to topple Australia and Chinese Taipei at the Premier 12.

“We absolutely have to beat Australia in group play,” Kim said. “Australia may have struggled a little bit at international events, but you never know what can happen in a short tournament like this. We’re going to have to analyze them inside out.”

Canada is the lowest-ranked team in Group C, but Kim knows not to underestimate the team from Great White North.

At the Beijing Olympics, Korea eked out a 1-0 win over Canada, behind a complete-game shutout by pitcher Ryu Hyun-jin, currently with the Los Angeles Dodgers.

“I still remember the game against Canada at the Beijing Olympics, and I know this is not a team to be taken lightly,” Kim said.

As for Cuba, Kim said, “They say Cuba has taken a step or two back, but I think Cuba is still a baseball power. We have to be ready.”

Kim will travel to Japan on Feb. 22 to check in on a half-dozen KBO teams in spring training there. Then on March 9 and 10, he will attend exhibition games between Japan and Mexico in Osaka, Japan.

“I’ll be speaking with KBO team managers and we’ll discuss many different issues,” Kim said. “I’ll try to identify things that I might have missed in the past.”

The WBSC Executive Board recently decided that if no team from Asia or Oceania finishes among the top six of the Premier 12, that Olympic slot shall be deferred to the last Olympic Qualifier.

The WBSC will organize separate qualifiers for Africa/Europe and the Americas. Its intercontinental qualifier, featuring six teams, will be the final opportunity for countries to book their spots at Tokyo 2020. The participants in that one will be the runner-up from the Africa/Europe qualifier, the second- and third-place finishers from the Americas qualifier, the two best finishers from the 2019 Asian Championship that haven’t already qualified for the Olympics and the winner of the Oceania qualifier.