Time for a rational solution

Time for a rational solution

PARK HAE-LEE
The author is a social news reporter of the Joongang Ilbo. 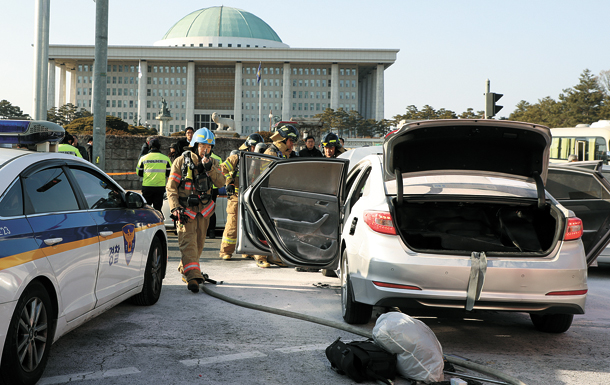 A 62-year-old taxi driver identified as Kim set himself on fire and drove a taxi into the National Assembly Monday to protest the introduction of the Kakao carpool service. [NEWS1]

“Sorry to the person who set fire to himself, but such an attempt is inconceivable,” said taxi driver Lee Jong-oh as I was in his cab on the day of the incident on Feb. 11.

A 62-year-old taxi driver identified as Kim had been actively participating in protests opposing Kakao carpool service and had set himself on fire and driven his taxi into the National Assembly. It was the third time a taxi driver had set himself on fire in two months. Lee said the taxi industry would eventually be standardized with low-quality service if carpooling becomes widespread. “I don’t think such protests will resolve the overall problem,” he said.

Citizens feel sorry about the deaths but do not agree with their way of protesting either. A friend who frequently uses taxi said, “I understand they are in a difficult situation, but I changed my mind when taxis refused to take me at night on weekends.” Another interviewee said the extreme actions the drivers had chosen actually encourage repulsion.

The drivers who are members of the emergency committee of the taxi industry I met at the protests and the drivers I met on the street have a difference in opinions. On the repeated deaths by fire, the taxi emergency committee remained silent. When I asked for an interview, they expressed hostility. They claimed that because the media reports were different from the committee’s positions, the public sentiment on the taxi industry was worsening.

But the taxi drivers I met on the street shared various stories. Private taxis and corporate taxes have their own problems. Some drivers pointed at the laziness of some drivers. While some of them advocate deleting the Kakao app, they still take calls and arrive after driving taxis with “Kakao Carpool Out” stickers. “It is inevitable as I need to make a living,” a 66-year-old driver said.

Protests continue, but the end is not in sight. It is understandable that taxi drivers feel desperate and their survival is threatened as the carpooling issue continues, but they need to avoid extreme choices. Suicide has long been a social issue in Korea. According to the 2018 health statistics by the OECD, 25.9 people die of suicide out of every 100,000 — the highest among OECD members. As Korea is tainted with such a high suicide rate, it is undesirable to try to resolve the taxi issue with reckless methods of risking their own lives. They need to seek a rational solution after ending the vicious cycle of tragedy first.