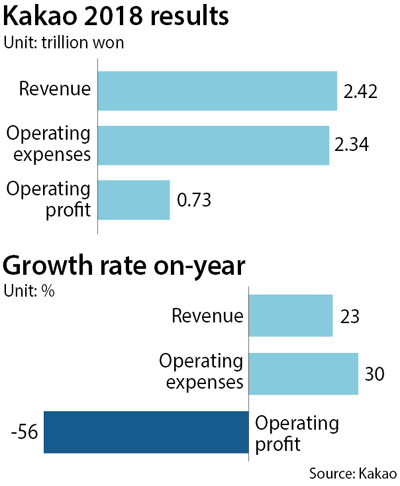 Kakao’s revenue hit an all-time high in 2018, but operating profit fell by more than half as the company spent heavily on marketing and new business development, according to results released Thursday.

The company, which operates the KakaoTalk messenger and offers a wide range of other internet and mobile products and services, reported 2.4 trillion won ($2.1 billion) in revenue last year, a 23 percent rise.

“Fourth quarters are a seasonal peak for e-commerce during the year-we invested the most during that period and saw sales rise higher than projections” the vice president said.

In the final quarter of the year, Kakao’s operating expenses hit 668.8 billion won, up 31 percent year on year.

Both Bae and a company press officer expected expenditures to fall this year, as spending last year should start to yield results.

Some analysts are skeptical.

“Expectations for Kakao’s mobility service were diminished following the suspension of its carpool service,” said Lee Moon-jong, an analyst at Shinhan Investment.

Last month, Kakao announced it will halt test operations of its carpool service as a conciliatory gesture to ease tensions with the local taxi industry.

The move comes a month after the company launched a beta service of the carpool platform on Dec. 7. Kakao Mobility, the affiliate in charge of all transportation services, made the decision to halt testing during a board of directors meeting on Jan. 15.