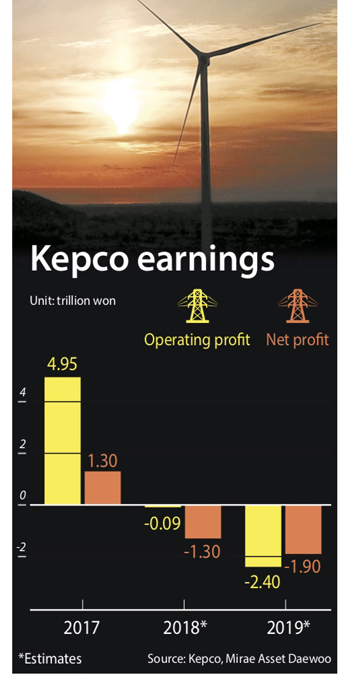 Korea’s largest electric utility company projects major losses this year as the government continues to push for reduced reliance on nuclear power and a focus on renewable energy.

According to Kepco’s internal report for emergency management measures for 2019, the utility company forecast 2.4 trillion won ($2.1 billion) in operating losses and 1.9 trillion won in net losses this year. The projections are based on internal cost estimates.

The company will post its financial results for 2018 on Feb. 18.

Kepco’s losses can largely be blamed on the reduction of nuclear power and support for renewable energy companies.

“The 2.4 trillion won operating losses is a separate figure based on the company’s standards,” explained a Kepco press officer. “It takes a conservative approach in costs such as fuel prices and currency rates.”

“It doesn’t account for Kepco’s internal efforts to improve the situation,” added the press officer. “After December last year, energy prices have steadied and the nuclear plant operation rate is increasing.”

“If nuclear plants operate under the current revised schedule, the operation rate will exceed 80 percent in the first and second quarter this year,” said Jay Ryu, a researcher at Mirae Asset Daewoo. “However, there is a possibility that there will be additional postponements to the operation schedule.”

“If maintenance on nuclear plants starts in the second half of this year, the operation rate could be lower than 70 percent.”

According to FnGuide, a data provider, Kepco’s average target stock price by analysts was at 40,833 won Wednesday, 15.6-percent lower than the previous year.