Nexon steps away from autoplay with Traha

Nexon steps away from autoplay with Traha 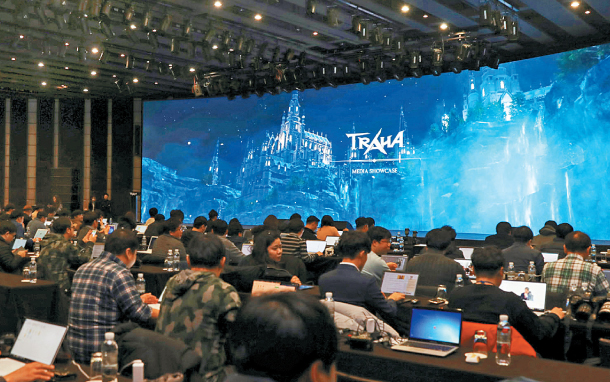 Nexon heralded the return of manual gameplay with its highly-anticipated mobile game Traha during a media showcase Thursday. Pre-registration for the game opened on the same day.

Moai Games CEO Lee Chan highlighted user engagement in gameplay as one of the key goals with Traha.

“Traha brings user engagement back and offers unique experiences depending on user choices,” said Lee. “We will still offer an autoplay mode, but Traha rewards users who play manually by giving them up to two or three times more experience points.”

The move is seen as a response to some gamers’ concern that many mobile games today allow users to increase character experience just by relying on autoplay mode, rather than actually playing the games.

The developers also vowed to try to maintain user interest in Traha over the long term instead of focusing on instant revenues.

“Traha also offers a premium service for loyal users, as well as a payback system, which we will describe in more detail later on,” added Choi Sung-wook, a mobile business manager at Nexon. In other games, the so-called payback system typically gives rewards to friends when a user makes in-game purchases.

“Traha is the first mobile game that requires 5 gigabytes of storage at launch. It will only be able to be played on the iPhone 6S, Galaxy S7 or newer devices,” said Lee.

As was previously revealed during the G-Star unveiling, the game will allow users to freely change their character’s class or profession, simply by switching their weapons under a feature titled “infinity class.” The game also allows users to customize character appearance down to the smallest detail like the slope of their eyes.

During the showcase, Nexon announced Chris Hemsworth was chosen to advertise the game.

Nexon did not address any rumors surrounding its acquisition. The company is currently in the spotlight after founder Kim Jung-ju reportedly said he plans to sell his controlling stake in the game’s holding company.