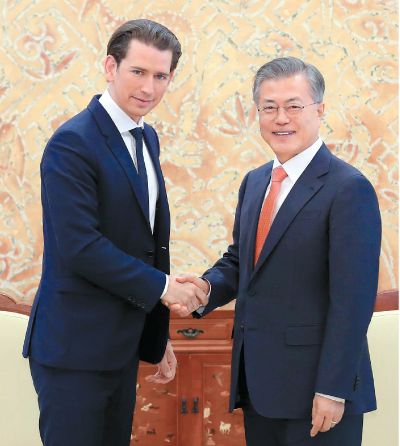 In a summit held at Moon’s presidential office, the two leaders also sought ways to expand the countries’ economic cooperation.

“I highly welcome the fact that South Korea and Austria have developed their friendly cooperative relationship over the years while sharing common values, such as democracy and human rights, as close friends,” Moon said at the start of their summit.

Moon also congratulated the Austrian leader for being named one of the 10 next-generation leaders by Time magazine in the United States, according to Blue House pool reports.

Kurz expressed hope for increased trade between the countries, noting their bilateral trade currently stands at about $2 billion.

“I also wish my visit to South Korea will be an opportunity to further expand our exchanges in economic, political and academic areas between South Korea and Austria,” he was quoted as saying through his interpreter.

Kurz, who is the world’s youngest head of government, arrived here earlier in the day, becoming the first Austrian chancellor to visit South Korea in 19 years and the first ever to visit for a bilateral summit, the Blue House said.

The Austrian leader is set to hold talks with Prime Minister Lee Nak-yon later in the day. He will leave the country Friday.