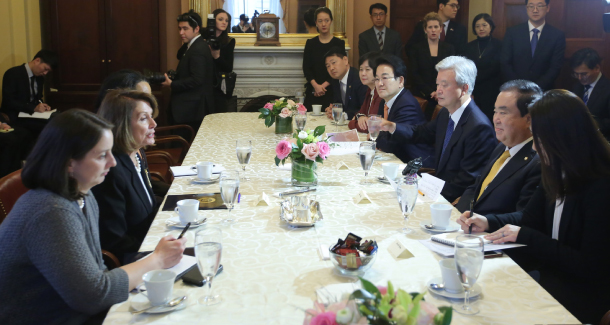 A South Korean delegation of lawmakers, right, talk with U.S. House Speaker Nancy Pelosi, left, on the denuclearization of North Korea at the Capitol in Washington Tuesday. [YONHAP]

A South Korean delegation of lawmakers visiting Washington this week for talks with U.S. officials ahead of the second U.S.-North summit clashed with House Speaker Nancy Pelosi over Pyongyang’s true intentions after she accused the North of pursuing South Korea’s “demilitarization.”

Members of the delegation said at a briefing for South Korean media outlets that Pelosi, in a closed-door meeting Tuesday, asked the group what Seoul expected from the upcoming summit, which is set to take place in Hanoi, Vietnam Feb. 27 and 28.

When Rep. Chung Dong-young of the minor leftist Party for Democracy and Peace replied that forging ties with the North like the United States did with Vietnam would help the United States “expand its national interest,” Pelosi shot back that she doesn’t trust the North.

Pelosi, according to the South Korean lawmakers Tuesday, then recounted her experience visiting the North in 1997 with members of the House Permanent Select Committee on Intelligence.

She said the poverty she witnessed in the North Korean people’s lives was unimaginable. Since then, Pelosi said, she couldn’t trust the Pyongyang regime.

Pelosi’s meeting with the delegation was initially scheduled to run for 30 minutes but lasted for over an hour as the talks grew intense.

At one point, Pelosi reportedly said last year’s first summit between North Korea and the United States was nothing but a show, and that U.S. President Donald Trump failed to return home with any accomplishments. Pelosi continued, saying she wanted to see real proof that Pyongyang was denuclearizing. North Korean leader Kim Jong-un, she added, is trying to demilitarize the South, not give up his nuclear weapons.

National Assembly Speaker Moon Hee-sang, who led the South Korean delegation, said Pelosi also brought up his recent spat with the Japanese government and told him she was worried about strained ties between Seoul and Tokyo, adding she hopes they settle the issues soon. Moon said he felt Pelosi made the comment due to Japan’s request.

“I think Japan told her to have a word with [us] before the meeting, or in other words, scold us,” said Moon.

During an interview with Bloomberg last week, Moon called on the Japanese emperor to apologize to South Korean victims of Japan’s war crimes during World War II, calling him “the son of the main culprit of war crimes.” That angered Japanese Prime Minister Shinzo Abe, who urged Moon to offer an apology and retract his statement, both of which Moon refused to do.

Toward the end of their meeting, according to the South Korean lawmakers, Pelosi said she still wasn’t hopeful about the results of the upcoming summit in Hanoi, but continued she hoped she was wrong and the South Korean delegation was right.

Unfazed, Moon told reporters during the press briefing that “the era of Pax Koreana” has arrived, and that the K-pop sensation BTS and Andy Kim, a Democratic New Jersey House representative of Korean descent, are “conquering the world from New York.”