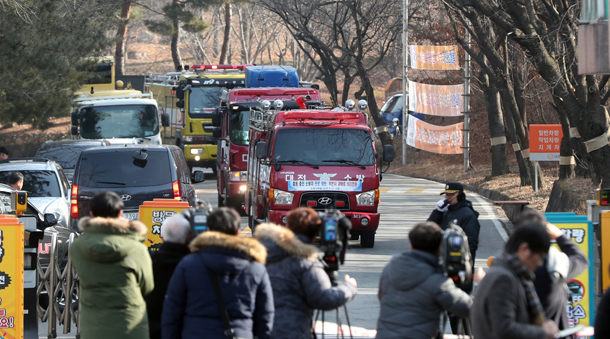 Fire engines and ambulances return after putting out a fire at a Hanwha rocket factory in Daejeon, where three people were killed on Thursday. The explosion occurred around 8:42 a.m., with the direct causes of the accident not yet known. [NEWS1]

After an explosion at a Hanwha munitions factory killed three people Thursday, the Daejeon Regional Employment and Labor Administration ordered a halt to all operations at the plant and sent nine investigators to examine the causes.

Last May, the same factory experienced an explosion that killed two people.

The explosion occurred around 8:42 a.m. in a Hanwha plant in Daejeon, killing three full-time workers. Two were reported to be in charge of assembling rocket parts and the third was in charge of quality-control tests. No additional details are known about the victims just yet except one fatality was 25 years old.

“At first there was a huge explosion, followed by an immense cloud of black smoke,” said a witness who first reported the explosion to a fire station. The blast blew away 115 square meters of the factory roof, allowing the inside of the factory to be seen from without.

Forty fire vehicles were mobilized and the fire was put out in less than an hour, but the specific causes of the accident were unclear.

Hanwha officials reported the fire supposedly started from a rocket propellant. The factory conducts research on next-generation guided weapons for Hanwha Corporation’s Defense Division. It specializes in fueling rockets, torpedoes and other military ordinances, and its specialty is Chunmoo, an artillery system developed by Hanwha.

Hanwha operates four such arms facilities across the country, including the one at Daejeon.

“Specific details cannot be disclosed due to security issues,” added an official from Hanwha.

In response to the fatal accident, the Daejeon Regional Employment and Labor Administration announced it will “stop all operations of the plant until specific causes of the explosion are determined.”

The factory cannot resume operations until it reports on safety conditions in the facility and the company establishes a safety protocol to prevent future accidents. The final step is a visit from the labor supervisor to inspect the feasibility of the protocol and the state of the factory’s facilities.

The Daejeon Provincial Police Agency also announced it will jointly investigate the cause of the explosion with the Daejeon Regional Employment and Labor Administration.

“If necessary, we plan to summon the factory managers for the investigation, and will conduct a briefing if there are additional findings,” said the police.

Last May, the explosion that killed two and injured five took place when workers were inserting solid fuel into a rocket.