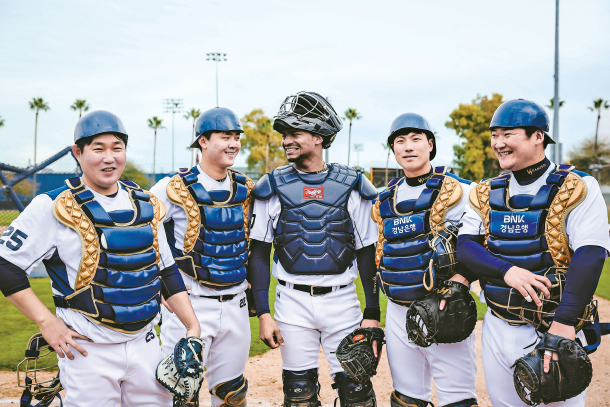 The NC Dinos’ biggest weakness in the 2018 season was its catcher. This year, they may have overcompensated.

In December 2017, the Dinos’ starting catcher Kim Tae-gun joined the Police Baseball Team to serve his mandatory military service. In preparation for Kim’s departure the Dinos began developing five catchers. Not satisfied with the progress, the Dinos quickly recruited Jeong Beom-mo from the Hanwha Eagles right before the season started.

Jeong and Shin Jin-ho rotated as the Dinos’ starting catcher throughout the season, but neither of them emerged as Kim’s replacement. In the middle of the season the Dinos called-up Yoon Soo-kang, but that ended in disappointment, both in defense and offense. None of the three catchers had a batting average above .200 last season.

The Dinos ultimately finished the 2018 season in last place for the first time in the team’s six-year history. With Kim still absent for another year, it was clear something seriously needed to change if the Dinos were going to climb back up the table.

Throwing money at the problem seemed to be the obvious solution, and the Dinos apparently had cash to spare. While the team has a reputation for spending little and concentrating on developing existing players, when the 2018 season ended, the Dinos went shopping.

But all that spending has left the Dinos with a completely different problem going into the 2019 season, although admittedly a more welcome one. While many clubs only take three or four catchers to spring training, the Dinos now have five catchers potentially vying for the one spot on the roster.

As well as the three existing catchers, the Dinos brought on Yang Eui-ji, the best catcher in the KBO, and Christian Bethancourt. Yang was signed at 12.5 billion won ($11.1 million) and Bethancourt at $1 million, the maximum allowed for a new foreign player.

There were rumors the Dinos signed Bethancourt to strengthen their catchers as, at the time, they were still in talks with Yang. However, as the Dinos ended up finalizing contracts with Yang and Bethancourt, it looks likely that the utility player, who played for the Atlanta Braves and San Diego Padres before joining the KBO, will be signed to another position.

Bethancourt is the one possible catcher the Dinos don’t need to worry about finding another home for. Throughout his career he has played in the outfield, infield, on the mound and as catcher. When the team signed the Panamanian player they intentionally didn’t assign him to a position, but at spring training, manager Lee Dong-wook has given him the catcher’s mask.

“Bethancourt is good enough to be successful as a catcher,” Lee said. “Just like how there’s a battery of foreign pitchers and a Korean catcher, there’s no rule saying that a Korean pitcher and a foreign catcher won’t work. We’ll find different ways to use Bethancourt.”

The KBO has never really seen a successful foreign catcher. The closest the league has come was Wilin Rosario, who played two seasons with the Eagles from 2016 to 2017, but he spent most of his time at first base rather than behind home plate.

Bethancourt has also confirmed he’s keen to play as catcher, saying he feels more comfortable in the position and promising to study Korean in order to make a quick adjustment. If Bethancourt gets along with the pitchers well enough, he’s expected to lift some pressure off of Yang as the two can split the role throughout the season.

“Bethancourt is a catcher that played in the major league,” Yang said. “There’s a lot that I need to learn from him.”

Yang is the league’s best catcher and is considered an outstanding player in both defense and offense. Last season, Yang had a .358 batting average, good enough to finish second in the league. Behind the plate he led the Doosan Bears’ young pitchers to win the regular season.

Yang and Bethancourt are currently the two standouts in the catcher team, but the other three are also working hard to compete for the starting spot. Jeong and Shin are focusing on their throws and blocks, which were considered their weaknesses last season. And Kim Hyung-jun, the youngest Dinos catcher at spring training, is working to pick up skills from the veterans.

The Dinos are already starting the 2019 season with a few too many catchers and that situation is only going to get worse at the end of the season when Kim Tae-gun is discharged from the military.

In September, Kim will return to the team but he may not be able to return to his position. Kim finished his first season with the Police Team with an impressive .320 batting average with eight home runs and 35 RBIs in 66 games, but those figures may not be good enough to secure his spot on the starting roster if Bethancourt or Yang perform as expected.