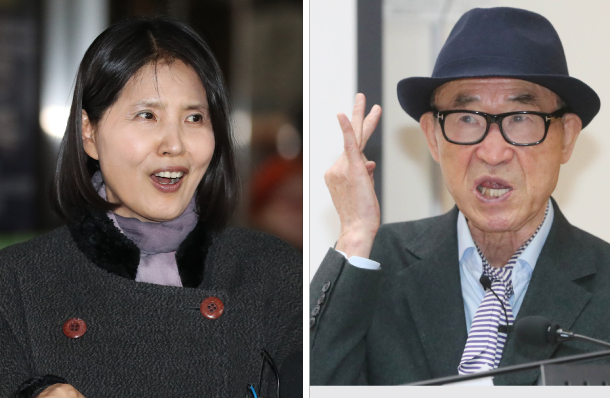 Poet Choi Young-mi’s allegation that poet Ko Un had been obscene in public in the past was ruled to be truthful, according to the Seoul Central District Court Friday.

In a suit Ko filed in July against Choi, poet Park Jin-seong and a media company that reported Choi and Park’s allegations on Ko’s lewd behavior, the court ruled that there’s no reason for the court to doubt what Choi said about Ko, based on evidence and statements submitted to the court during the trial. Choi appeared in court during the trial and stated that she spoke only about the things that she had seen, while the evidence submitted from Ko was considered weak.

The court also ruled that there was not enough evidence to support Park’s claims and ruled that Park needs to pay 10 million won ($8,848) in damages to Ko. Park implied in a Facebook post made in March 2018 that he had seen Ko sexually harass a woman by showing her his genitals in 2008. Park did not appear during the trial, citing health issues.

The court ruled that the media company that reported Park’s argument didn’t do anything unlawful, although it said that what was reported is false.

It said the allegations themselves touch on the public interest because Ko is a well-known writer. Ko was discussed at length as a possible candidate for the Nobel Prize in Literature.

Right after the ruling, Choi met with the press and expressed her frustrations for having to deal with a lawsuit for telling the truth.

“We should not have a society in which a sexual predator sues their victim,” said Choi, who has been arguing that Ko was habitually sexually harassing female writers and that she had witnessed improper actions many times in the early 1990s.

She appeared on JTBC’s nightly news program “Newsroom” in February 2018 to talk about what she had seen and share how the cases of sexual assault were prevalent in the literary community, as aspiring writers were scared of failing to secure writing posts as a result of refusing sexual requests from well-known writers.

The controversy over Ko’s improper behavior came to the surface with Choi’s poem that was published in a literary magazine in 2017, which seems to indicate Ko without mentioning his name directly. The poem, “Goemul,” which can be translated to “Monster,” shows how some literary experts sexually abuse new writers.

“Forgot K’s advice and sat next to En / Me too / Silk suit top borrowed from my younger sibling got wrinkled.”