Piano quintet keeps it all in the family: The 5 Browns create a totally different experience with their performances

Piano quintet keeps it all in the family: The 5 Browns create a totally different experience with their performances 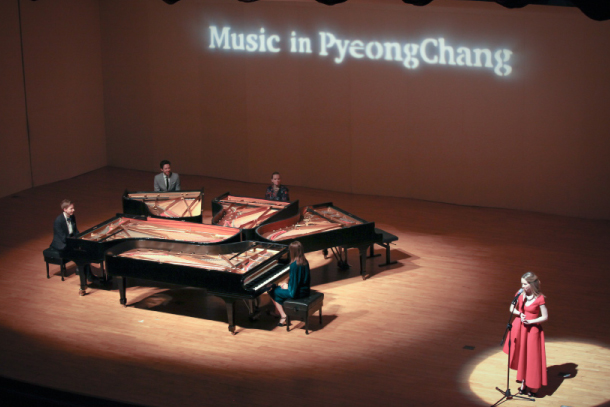 The winter edition of the Great Mountains Music Festival comes to an end today with a concert in Jeongseon’s Park Roche at 5 p.m. that wraps up the 10-day event. The festival has run since 2004, but organizers say that one of the most physically challenging performances to put on came this year, in the form of The 5 Browns, who use 50 fingers and five pianos to perform at the same time. Five heavy Steinway pianos were set up in the Concert Hall at the Pyeongchang Alpensia Ski Resort in Gangwon on Feb. 9 and this piano ensemble composed of five siblings - two brothers and three sisters - showed off their skills to celebrate the one-year anniversary of the 2018 Winter Olympic Games that were held there.

Prior to their performance, the Korea JoongAng Daily interviewed the quintet, which includes Ryan, Melody, Gregory, Deondra and Desirae, via email to learn more about the sibling ensemble and their concert in Korea.

Q. Artistic Director Son Yeol-eum of the Great Mountains Music Festival said she knew one of your siblings but really decided to invite the whole ensemble to the festival because she was mesmerized by your performances [she had seen] on YouTube. Can you tell us how you were invited to the festival?

A. Gregory: I first became familiar with Son Yeol-eum when she won the silver medal at the Van Cliburn competition, but I had never seen her perform live until she gave a concert in my hometown of Washington. I was incredibly impressed by her playing, and after congratulating her, we decided to stay in touch.

A few months later, she was gracious enough to invite us perform here in Korea. This is a great honor for us, as Son Yeol-eum is easily one of the most talented pianists of our generation and we admire her greatly.

Playing the same musical instrument as your siblings, did you ever get competitive, especially when you were younger?

Desirae: We can definitely get competitive with sports and board games! We aren’t competitive with music, though. Maybe that is unusual? I think we have always understood how hard we each were working and empathized with the highs and lows of a life in music. Sometimes we would compete against each other in competitions when we were younger. Obviously, each of us individually wanted to win but if we didn’t win we certainly wanted one of the five of us to beat everyone else.

The 5 Browns became the first family of five siblings to ever be simultaneously accepted to the Juilliard School. How did that happen?

Desirae: We each individually auditioned for Juilliard and got in on our own merit. There is no sibling priority for admittance to Juilliard. Deondra and I got into the school first and the next year the others joined us. At the time we were attending it seemed somewhat normal to have all five of us at Juilliard, but now, looking back, it must have seemed really strange for our classmates and teachers.

I know that you also perform individually or together in various combinations. But performing in a quintet seems very difficult, especially as siblings. Why did you decided to form the ensemble?

Deondra: We’ve played duets since we were children and have always enjoyed it. In our latter Juilliard years as two of us were getting ready to graduate, we began thinking about the future and our place within the musical world. We decided to pool our efforts and perform together. We have had many five piano arrangements and compositions written for us over the years that have continued to challenge us as musicians and have proven to be a lot of fun as well. It’s been amazing to travel the world together, performing music we love.

What are the advantages and disadvantages of being a family ensemble?

Deondra: We all received the same training growing up and also at the Juilliard School, so we approach the keyboard in a similar way. Sometimes we anticipate in each other’s musical responses and timing in a way that can even surprise us! But because we know each other so well, we can also press each other’s buttons and get frustrated easily. We have learned over the years that even as tired or jet-lagged as we may be, the greatest thing we can do is to be nice and show respect for one another.

What’s the charm of five pianos? I heard director Son saying that five of you on pianos creates a totally different sound.

Melody: When we first started playing on multiple pianos a lot of people thought it was a new and original idea, but actually it is a very old idea. Back in the 19th century, many leading composers and pianists of the day took part in what were called “monster concerts,” where everything from four to 20, to 100 pianos would be on a stage. They would play the biggest opera and symphonic “hits” of their day.

We really feel like we’re just bringing this idea back. We like to call it a symphony of pianos. As pianists we rarely get to take part in any orchestral repertoire, so it’s amazing that we finally get to play things like Stravinsky’s “Firebird” without feeling like any of the parts are missing. But since the piano is a percussive instrument, the “charm” to it is being able to play five different pianos at exactly the same time - to make five pianos sound like one piano is definitely the challenge and the beauty all at once.

Who started playing the piano first? Didn’t you want to play other instruments?

Melody: Desirae was the first to start playing the piano at the age of three. Because so many younger siblings look up to their older siblings, each of us wanted to play when we turned three as well. I think if we were smarter and played different instruments growing up we could’ve been a pretty good piano quintet - two violinists, a violist, a cellist and a pianist. I would’ve loved to play the cello. I think it’s such a beautiful instrument.

A documentary film titled “The 5 Browns: Digging Through the Darkness” was recently released, and it reveals your family’s past, especially your father’s sexual abuse of the three sisters. It must have been difficult to recollect the memories of your family’s painful history, but why turn it into a film?

Ryan: It hadn’t necessarily crossed our minds, but we were fortunate to meet the very talented filmmaker Ben Niles. His care and understanding surrounding our story ultimately allowed us to consider this format for sharing our story. It took a special person like Ben to collaborate on this project considering the sensitive and personal material.

Our hope is the film helps audiences understand the healing powers of music while offering a view of the connectivity and strength it’s provided our relationships as siblings. But the biggest value in sharing our story was to help shed light on the protection needed for children and abuse victims, as exemplified through my sisters’ - Desirae and Deondra - Foundation for Survivors of Abuse (survivingabuse.org).