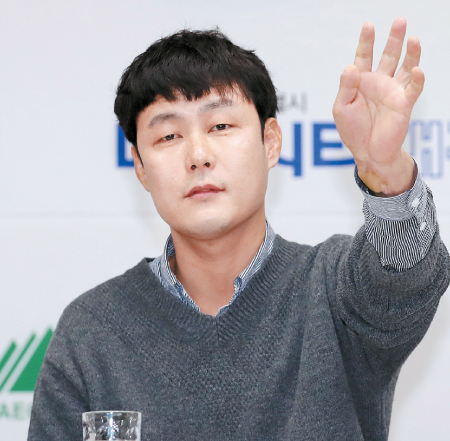 “Feb. 2 this year is very special to me, because it marks the second anniversary of my new life, with my new arm,” said Sohn Jin-wook, 38.

Sohn, also known as “the man with a stranger’s arm,” is the first person in Korea to receive an arm transplant. His left arm, starting from his fingertips to 10 centimeters (3.9 inches) up his wrist, once belonged to a brain-dead patient.

“At first, it didn’t feel like my arm. I couldn’t feel anything, and it felt like my body too, knew that the arm wasn’t mine,” said Sohn.

“But now, it’s been two years since the surgery, and as you can see, I can lift up objects without effort. I can move all five of my fingers and my hands learned how to sweat again,” he said, as he lifted up his coffee cup with his left hand.

Sohn lost his arm while working on a construction site in 2015. He lived with a prosthetic hand until he received an arm transplant in 2017 at Yeungnam University Medical Center in Daegu.

It was a delicate operation that involved connecting the bones, muscles, blood vessels and nerves of another person.

“It was even hard to type a letter with a keyboard or use a smartphone,” said Sohn.

“Now things are much easier — I can use the laptop and smartphone without difficulty, and feed myself with a spoon. I can finally feel whether an object is hot or cold, go to the gym, and I can drive again. The surgery really changed my life.”

Daily life isn’t the only thing that changed in Sohn’s life. Last fall, he met “the woman of his dreams,” who he plans to marry sometime next year.

Sohn had also been invited in numerous social events. In July 2017, he threw out a powerful first pitch at a baseball game between the Samsung Lions and LG Twins.

He also worked as a promotional ambassador for Daegu Medicity.

Sohn’s arm transplant caused some controversy, as arms were not listed on Korea’s Organ Transplantation Law. However, the Ministry of Health and Welfare added arms to the list in April 2017.

The revision of the law allowed Sohn to receive health insurance, lifting a heavy financial burden, as Sohn has to take prescription immunodepressants.

Now his life is much better, Sohn has a new goal in mind.

“I hope that someday, there will come a time when the disabled will be free from the social biases that are prevalent in this society,” he said.

He reflected on time when he had lived without his arm and said he “knew what it’s like to be given the cold shoulder.”

“My goal is to be help these people readjust to society, by working in social welfare institutions, instead of just being known as the man with a stranger’s arm,” Sohn said. ]