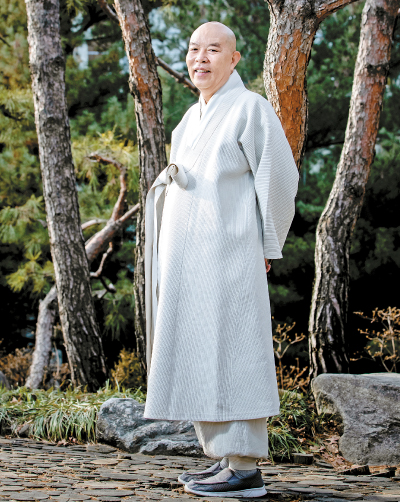 Han Tae-sik, 68, the former president of Dongguk University, emphasized during an interview that universities should “operate on their own to acquire global competitiveness” and “be free from governmental regulations and politics.” [PARK JONG-KEUN]

After Dongguk University appointed industrial food management Prof. Yun Seong-yi as the school’s new president on Feb. 8, attention has focused on Han Tae-sik, the departing president, who will retire Feb. 28.

“I want to end my last month on a good note,” said Han during an interview with the JoongAng Sunday. “It’d also be nice if I could be a good example to all the university presidents in the country, and maybe even give them a few lessons.”

Han, who also goes by Monk Bogwang, has led Dongguk University for a period of four years and had made bold reforms to the university’s curriculum, including re-establishing the school’s motto after 83 years and changing required freshmen courses. He had also been a professor for 27 consecutive years and has seen “every corner of the university” while serving as a dean and the director of external affairs for eight years each. He was also the first Buddhist monk in 25 years to become Dongguk University’s president.

Han said running for a second term was never his intention. Han plans to go back to Jeongtosa Temple, located on Mount Cheonggye, Gyeonggi, after leaving the university.

“I’ve done my part and duty during my four year term — and I know that my time is up,” he said. “An even better professor will lead the university, I have no doubt.”


Q. How was your time serving as president?

A. (laughing) I might as well admit that among all the 18 presidents, I was the one who was the most criticized. During the election, there were rumors about me being pre-appointed by the Jogye Order of Korean Buddhism. After being elected, there were false plagiarism issues regarding my paper, not to mention student protests and hunger strikes. But I’ve tried my best to overcome this with my motto “be an honest person that teaches students through open education” — and that’s why I attempted numerous reforms. The university is a truly a boisterous place full of diversity.

What was the most memorable thing for you?

The re-establishment of the school motto. The original motto was established in 1934, and read “single-mindedness, honesty, love and enlightenment.” The meanings are from old Buddhist scriptures, and even the professors don’t know their exact meaning. I thought, “if they don’t know it, how will they teach it to the students?” That’s why I re-established morals to the more familiar, “wisdom, mercy and devotion” in 2017, in celebration of the school’s 111th anniversary. Now the students have no trouble memorizing them.

In the era of the Fourth Industrial Revolution, a paradigm shift in education is essential. What are your thoughts?

To better prepare our students for this social atmosphere, I changed the freshmen curriculum by making meditation, classical reading, software education and start-up education courses mandatory. This is the only way to nurture elite students for the era of fusion and convergence. When students get rid of their discomfort toward software, then they can become fearless contenders during the Fourth Industrial Revolution.

Unfortunately, the global competitiveness of Korean universities is low. What are the causes?

If you look at the rankings of world universities, Dongguk is ranked at 400th place, but ranks 13th in Korea. This means there are only 13 Korean universities that rank under 400. And that’s a huge problem. And I think the problem stems from the fact our government intervenes too much by imposing strict regulations, and the financial difficulties of the universities. This is the very fact we cannot establish a Korean Minerva School that will allow us to acquire the capability to compete with world class universities.

What is a Minerva School, and how will it help establish global competitiveness?

It’s a unique U.S. school conducts classes online, with its headquarters in San Francisco. It started to accept new students in 2014, has a 2-percent acceptance rate, which is even smaller than Harvard University (4.6 percent). They have no campus and students there travel within seven countries in the world, including the United States, Germany, Britain and Taiwan each semester. It’s easy to foster global competitiveness because they have no governmental regulation — students are free to collaborate with companies like Google and Amazon, without any interference, unlike the Korean universities where the government interferes with everything. The schools need to be free from being involved with politics, and nurture students based on their own motives.

Then what do you think is the first thing that universities should do in order to nurture good students?

They should have more responsibility. Right now there are so many issues of universities not doing their jobs compared to the amount of money students pay. I have no doubts that there will come a time when graduates will file a lawsuit to demand a refund for their tuition fees. The professors need to teach properly and devise ways for students to get a decent job. They should feel more responsibility on their shoulders.

Do you have advice for the students who are struggling?

Love who you are. Don’t hesitate to delve into something you feel the most passion in. Take a look at BTS — they didn’t graduate from a prestigious university, nor did they study abroad. But look where they are now — they are one of the top artists in the world. This is because they followed their hearts and pursued music, which is what they are good at. Everyone has something that they are good at, so never be afraid of failure. That’s the way to success.


Han plans to go back to Jeongtosa Temple, located in Mount Cheonggye to restore his health. He had undergone three surgeries in four years during his term due to extreme stress.

“But I will help the school in every possible way that I can, regardless of where I am,” he said.