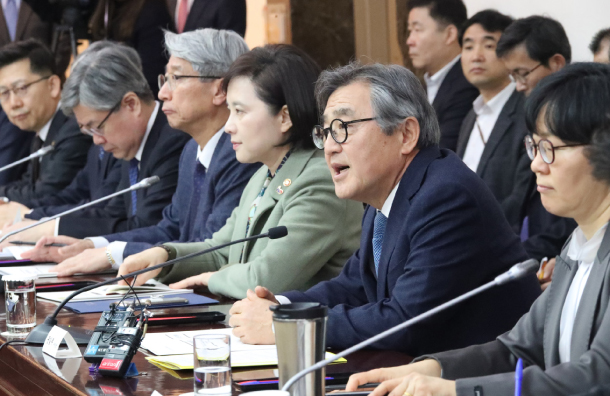 The government is taking aim once again at fine dust, and asking China and the public to help out.

Later this year, the use of some vehicles will be restricted, companies violating fine-dust rules will be fined and more plants will be powered down when pollution levels are high.

The fine-dust special counter committee offered up these and other solutions Friday during its first meeting. It is charged with reducing readings of the harmful pollutant by 2022 and operates under the auspices of the prime minister’s office. The co-chairman representing the private sector is Moon Kil-choo, president of the University of Science and Technology.

“The government every year has introduced measures that would reduce fine dust, including strengthening environmental regulation and taking emergency reduction actions, particularly in the Seoul metropolitan area and in the public sector,” Prime Minister Lee Nak-yon said. “As a result, our country’s ultra-fine particle-concentration level was at 23 micrograms per cubic meter, a slight drop from the previous year’s 25 micrograms per cubic meter.”

He called the committee the “control tower,” that will review measures proposed and decide which should be implemented first.

Among the measures that will be adopted this year is the targeted limiting of vehicle use. Outdated diesel vehicles are estimated to account for 22.1 percent of emissions generated in the Seoul metropolitan area.

At Stage 2, which will be implemented in June, smaller vehicles will also face the ban. The number of vehicles affected total 2.45 million.

The same fine will be applied to companies that manufacture or import equipment that reduces pollution but haven’t had the performance of the equipment verified.

The number of thermal power plants that will have to reduce operations when fine-dust levels increase will go from current 36 to 45.

Once the measures are implemented, the government expects fine-dust concentrations to drop to around 17 to 18 micrograms per cubic meter by 2022 and the number of days when air quality is considered “good” per year to increase from 127 days to 150 days.

During the meeting, the prime minister stressed the need for China’s participation in any fine-dust reduction efforts.

“In order to solve our fine-dust problem, and for China itself, we are asking for China’s cooperation,” Lee said. “It has already been proven that there’s a lot of fine dust that originates from China.