Pompeo puts the onus on Kim to live up to word

Pompeo puts the onus on Kim to live up to word 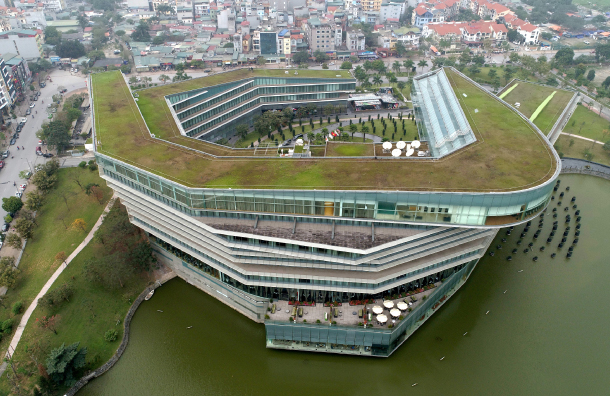 The aerial view of JW Marriott Hotel in Hanoi, Vietnam, which is considered the prime candidate for the venue for the second summit between U.S. President Donald Trump and North Korean leader Kim Jong-un. The vicinity of the hotel has been cordoned off since Trump announced the second Trump-Kim summit will be held Feb. 27 and 28 in Hanoi. [NEWS1]

U.S. Secretary of State Mike Pompeo said it is up to North Korean leader Kim Jong-un to make good on his promise to denuclearize before the sanctions are lifted in an interview with CBS News just a few weeks before the second U.S.-North Korea summit.

“Chairman Kim’s told us that repeatedly,” Pompeo said in Warsaw on Wednesday in response to a question on how confident he is Kim is committed to complete denuclearization. “And we’ve also said: trust but verify. We’re going to have to see that he does this.

“And it’s our full intention of getting a good outcome in exchange for relieving those sanctions,” he said. “I’m very hopeful that we can do that. It will be up to Chairman Kim to make this decision. He’s told us that he will, and now it’s time for him to deliver.”

Pompeo’s choice of words, “trust but verify,” echoes the famous dictum by former U.S. President Ronald Reagan, who in his groundbreaking talks with Mikhail Gorbachev in 1986 reportedly used them often, translating the Russian proverb, “Doveryai no proveryai.”

In his first meeting with U.S. President Donald Trump in Singapore last year, Kim agreed to the complete denuclearization of North Korea in return for “a lasting and stable peace regime on the Korean Peninsula.”

According to Stephen Biegun, U.S. special representative for North Korea, complete denuclearization includes dismantling and destroying all of the North’s plutonium and uranium facilities.

“In addition to the commitments on Tongchang-ri and Punggye-ri, Chairman Kim also committed, in both the joint statement from the aforementioned Pyongyang summit, as well as during the Secretary of State’s October meetings in Pyongyang, to the dismantlement and destruction of North Korea’s plutonium and uranium enrichment facilities,” he said in his speech at Stanford University on Jan. 31.

As the second summit between Trump and Kim approaches, scheduled for Hanoi, Vietnam, on Feb. 27 and 28, specialists and advisors from the two countries are ratcheting up negotiations and talks.

Biegun, who is in charge of preparing for the second summit, is to meet with his North Korean counterpart Kim Hyok-chol next week. This marks their third meeting. Their first was in Washington last month.

Also on the table at the upcoming summit in Hanoi is formally ending the Korean War. The 1950-53 Korean War between South and North Korea ended in an armistice, not a peace treaty, leaving the two Koreas still technically at war.

“It’s something we’ve had a lot of talks about,” Pompeo told Fox News in Warsaw on Thursday, when asked about how much the formal end to the Korean War will be dealt with at the summit. “Remember, we not only discussed denuclearization, but we talked about creating security mechanisms, peace mechanisms on the Korean Peninsula. I hope the two leaders have a chance to talk about that as well. I fully expect that they will.”

Pompeo was in Warsaw for the two-day Middle East Summit hosted by the United States and Poland from Wednesday. Representatives from around 60 countries gathered to discuss peace and security in the region, though it was boycotted by some European leaders, including Federica Mogherini, the European Union’s (EU) high representative for foreign affairs and security policy, who sees the summit as one geared by the United States to pressure EU nations to adopt a more aggressive policy on Iran.